Last year I started experimenting with making resin molds to make dice sets for Dungeons & Dragons, but somewhere along the way I decided to also try my hand at resin copies of a bitty babby moth guy sculpture inspired by my Moth Guy and fam. I made this sculpture specifically so that I could make copies, which is good since I damaged him on de-molding. The concept was that I could mass produce the Moth Babbies in lots of colors and distribute them in blind packaging. Unfortunately, as with most of my experiments I hit some bumps and never finished half of them and kinda put that project line to the side. I did however finish two of the resin replicas and sent them in swaps to @lindyv321 and The Raging Sloth. The issues were primarily in getting clean castings without excessive bubbles as well as in attaching the wings which I created separate molds for. I think the wing molds were also damaged since I played around with putty molds instead of liquid molds and it didn’t come out too well.

So here’s the “original” mothy sculpture that I used to make the mold with: 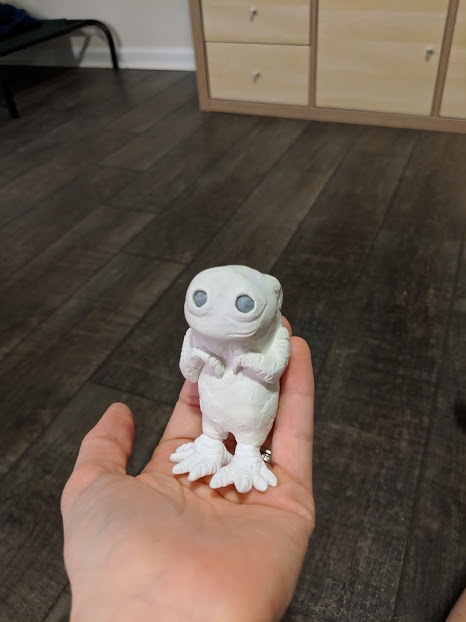 Here he is before his face was completed - I didn’t get a separate picture of his wings and they crumbled when I removed them from the wing molds I made. 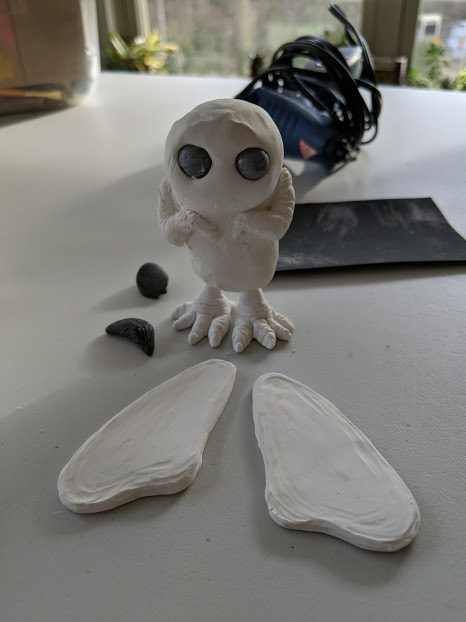 Hereare the first few resin copies. (I began painting the one on the right at this point, more details below). You can also see part of the mold in the top right corner of this photo - it looks like a purple solo cup

I glued the original form into the bottom of the solo cup and poured a silicon mold making formula inside and waited eagerly for a day or two for the mold to set. 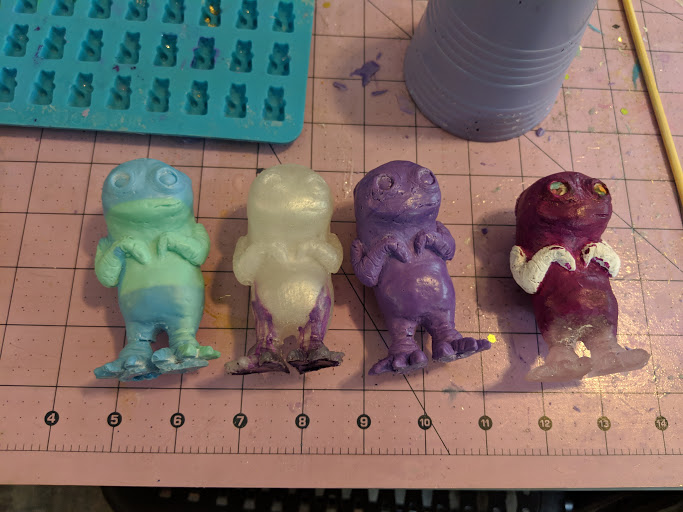 And here are the first two completed mothy babes. Their feet had to be grounded down (the resin was poured with the moth upside down so that I could take down where they were poured more easily).

This one had glitter in his wings and head. I painted his body to make the details more clear but also because I wasn’t happy with how the glitter all sunk to his head. The wings had some spots that didn’t fill well, so I patched them with buttons which is more reminiscent of the original moth guy and his smaller family members. I left his eyes unpainted so you can still see the glitter in his head 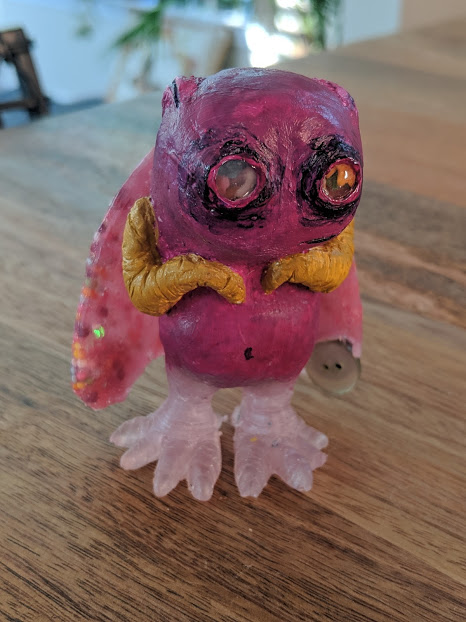 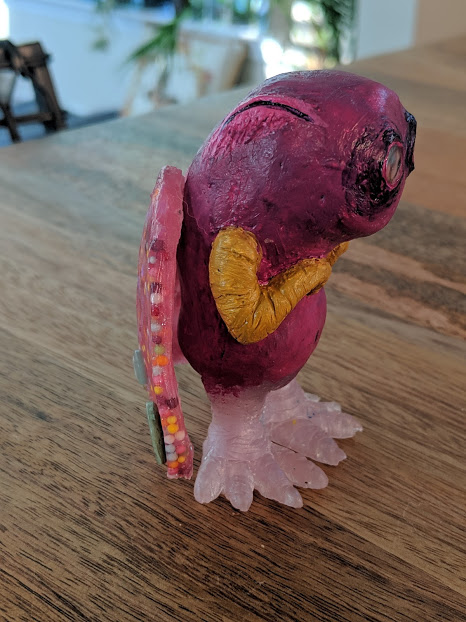 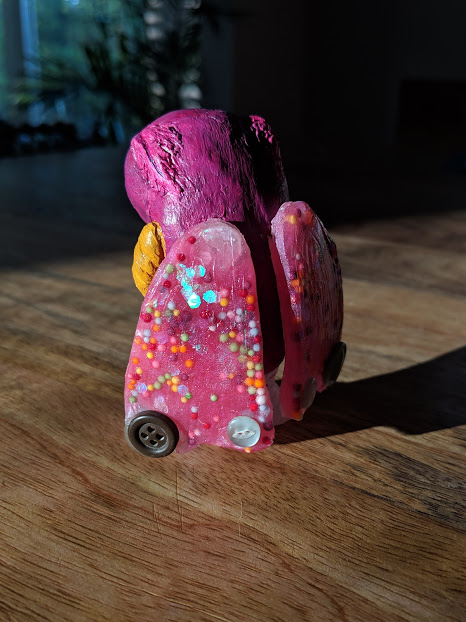 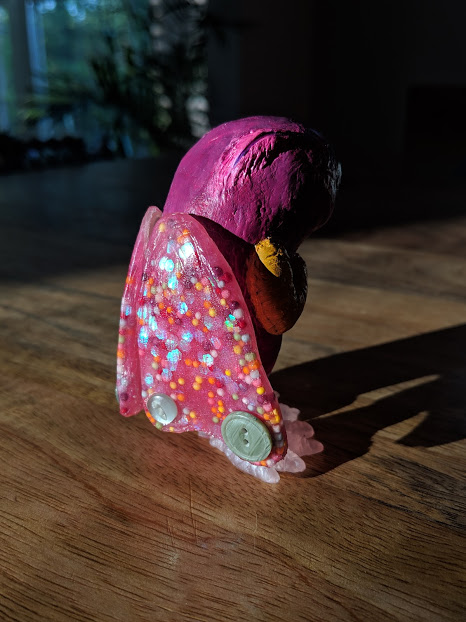 This little buddy went home with Mushy the Mothman as an extra. I kept him more simple with just the opaque resin I used with pigment mixed in before pouring. His wings still had glitter but with the opaque resin, it was more subtle. I added glitter to his eyes after the fact and used mod podge to give them a glossy look. 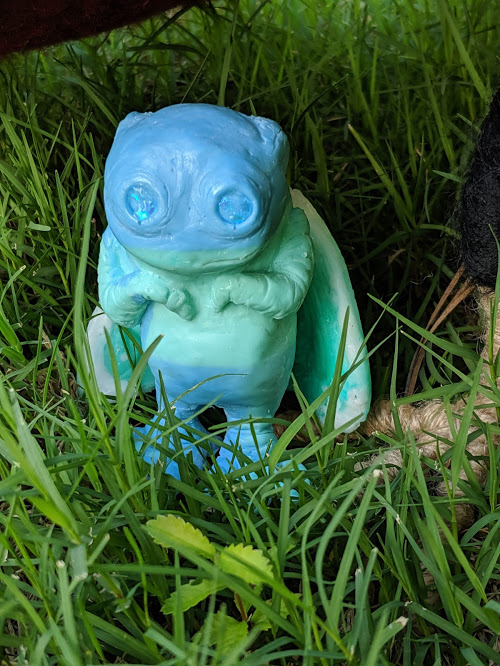 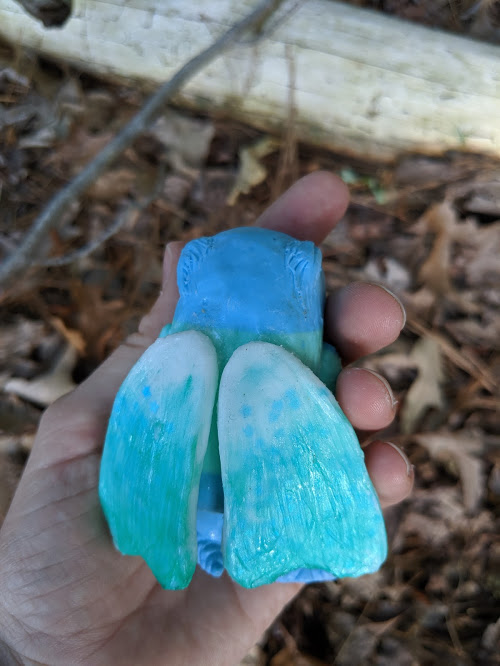 Wow that is so cool to make your own molds for reproduction! I got some putty stuff for making molds but only did one simple button mold. I should definitely go dig that out again and play with something a little more complicated

Bitty Moth Babbies are adorable. I love them just as much as I love Moth Guy and Fam.

Awww! Little moth babes! These would be adorable hidden in plants and the garden.

The little arms! They look like they’re just shy of plotting something.

I love my wee little moth man! He lives on a shelf with my other magical creatures!

Yay! I’m glad he feels at home with you! I was worried he would seem like a weird thing to send

I think he is adorable! I hope you continue to experiment and make more in the future.

There isn’t much that is too weird for this house!

So much detail, even on the soles of his feet!

These would look so cool with felted wings. Love them!

I thought about felt sheets with embroidered details for them actually! If I get around to making more, we will see how it goes. Two of them are still wingless in my stash

These are so great. Thanks so much for sharing your process!!!

great job with the casting