I love it when that happens!!

I started my project for this swap tonight. Just a small step in the right direction but things are moving! I totally have a plan!

I finished mine today! Might get it mailed out this weekend.
I had to scrap my original finished object because I couldn’t get those darn stains out. Ah well, I like the new and improved design MUCH better!!!

I’m done, too! My daughter keeps stealing it from me, so looks like I’ll be making another…

Can’t wait to see it! I think yours will be finished this weekend and mailed on Monday…hopefully!

I just started mine today! It should be done in a few days. I am changing up the colors from the pattern, so I hope it looks like I intend it to.

The gallery is up!

Weekly check-in: How’s everyone doing? We still have 2 weeks left before send outs (plenty of time)

Fun question: Are you a cat person or a dog person? Me? Definitely dogs but I love kitties too.

Here’s my 2 bundles of joy 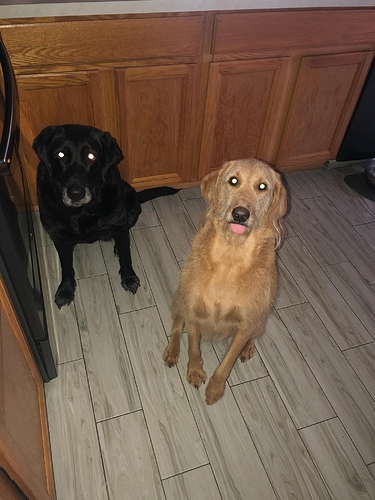 My package to Erin is with Mr. Road for mailing today! So…doing great!

I am also allergic to both dogs and cats and anything with dander for that matter.

Of course I still can’t resist saying a quick hello to most dogs I meet so I guess I’m more of a dog person.

They are so sweet!!!

I grew up with both a cat and dogs but I’ve always preferred dogs. The cat hated me from day one! I was the human always trying to sleep in her favorite sleeping spot (my bed!) and she didn’t like me knitting either. I have long hair so when I was sitting somewhere she used to even attack my ponytail!

We’ve been thinking of getting a dog but we’re both away from home for work quite a lot, including overnight stays. If that ever changes we’d love to adopt a dog. My sister has actually offered to be our dog sitter so we could get a dog, but she’s 2 hours away and loves to go on holidays and to parties all over the country. Knowing her she’d love to pick up the dog when it suits her but she’s not going to be a reliable backup. So unfortunately, no dog for us (yet).

My package to Erin is with Mr. Road for mailing today! So…doing great!

I am also allergic to both dogs and cats and anything with dander for that matter.

Of course I still can’t resist saying a quick hello to most dogs I meet so I guess I’m more of a dog person.

Awww man! No dander at all? so no guinea pigs or hamsters or anything fuzzy, huh? I would definitely be like you, even if I were allergic I’d tip my hat to any dog that walked by. I always joke around with my hubby that I’ve said I love you to one man in my life and every dog I’ve ever met!

I have long hair so when I was sitting somewhere she used to even attack my ponytail!

This made me giggle! I can just imagine a kitty cat attacking a ponytail like a rope toy!

Today is a holiday, so tomorrow I’ll ship!

I am a cat person. We have two currently. Frankenstein is 14.5 years old. We’ve had him since he was a tiny kitten. He was probably only 6 or 7 weeks old when we got him. He grew into a 17 pound behemoth! He has hyperthyroidism now, so he’s only weighing in at just under 10 pounds and is super scrawny

Then we have Monkey, our 8.5 month old ragdoll. He’s gorgeous but dumber than a box of rocks. I love him to pieces. We’ve had him since he was 2 weeks old and had to bottle feed him. He now weighs over 12 pounds and will be a giant.

Then we have Monkey, our 8.5 month old ragdoll. He’s gorgeous but dumber than a box of rocks.

I had a ragdoll cat once, best cat ever! She was a whopping 21 pounds! But you are 100% correct, dumb as a box of rocks! 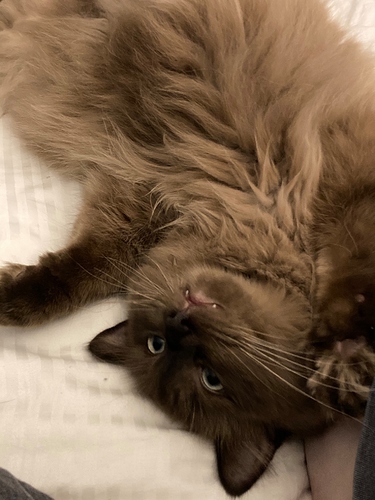 I just found the cutest fabric to finish my thing!

almost as cute as that vampire cat!

I just sent your package! Hopefully it arrives swiftly and safely.

Mine to endymion is out for delivery! EEEKK So excited! Queue the swap anxiety.
I broke my first rule and sent 2 things-but in my defense, I sent the one I screwed up and then I sent the legit one.
Hope she loves everything!

I’m just finishing my thing and I just had a brilliant idea! Now you guys will just have to wait a month or so to see what I did