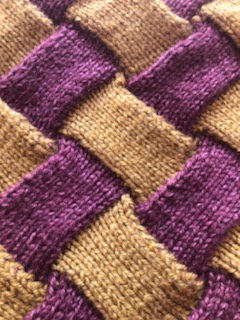 This is a gift for little Ada. I started it in 2021 and had a devil of a time getting the hang of it. I frogged it in January and started over. Then worked it up for what felt like FOREVER (as evidenced by my moaning on the snapshot thread). I am really happy with how it turned out. 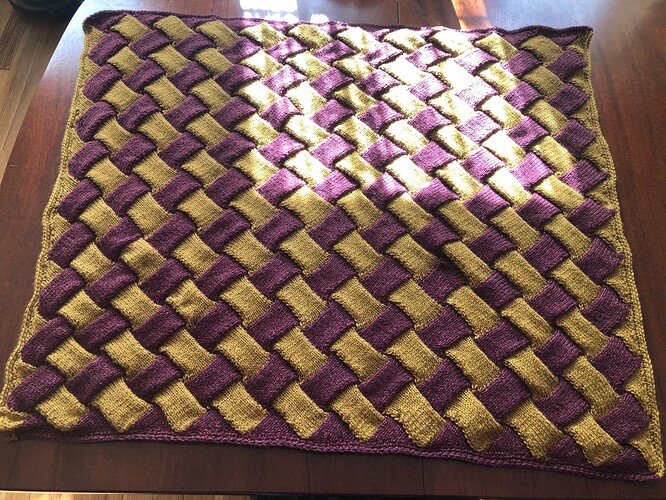 Pattern: Entrelac Knit baby blanket by Nikki in stitches, chosen in part because Ada’s mom is an accomplished crocheter/quilter but does not knit so I wanted to make something that she wouldn’t make for herself.
Yarn: The yarn is Lion Brand Heartland to match the Weasley sweater I made for her mother a few years ago. (Maroon: Badlands, Gold: Canyonlands.) I wanted it to coordinate mother-to-daughter, and I also liked the Gryffindor/Hogwarts angle as the HP craftalong on the Old Site is how her mother and I became friends.

I was aiming for “Burrow-esque” and super cozy. After knitting was complete I fussed for a while about a border. Settled on simple sc. Then I had to overthink and stress over how I was going to attach the minky backing that I had ordered from Spoonflower to really “up” the fandom and cozy factors. 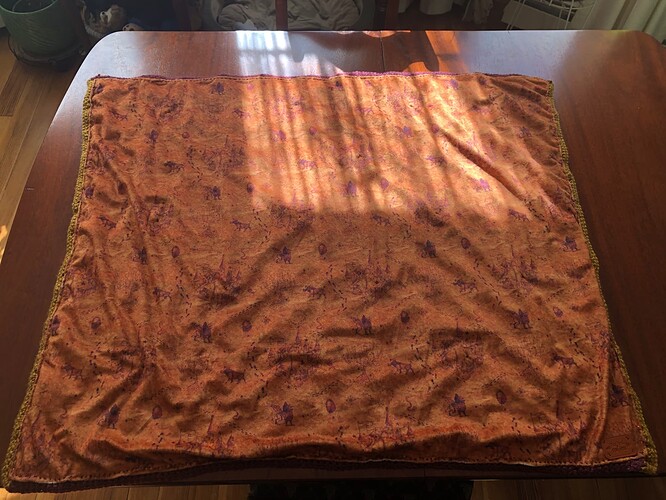 Because, obviously, I think it’s really important to make an insanely hot blanket for a baby living in Nashville. (Hmm, maybe the Thing knew that they were soon to move north. You’re a wizard, Thingee!) I like how the fandom pattern isn’t screaming HP in your face, it mostly (to my eye, anyway) blends out and you kind of have to actively look at it to see what it is.

I, umm, rustically, hand stitched the fabric to the back with cotton yarn. I used a maroon to do the sides that were maroon on the knit side and a mustardy one for the gold edges. 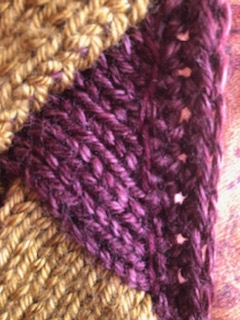 Then to keep it from ballooning out in the middle when in use, or if washed, I went in and did some tacking of the fabric to the knit with the maroon cotton trying to keep it from showing through on the front. Not being a skilled embroiderer/whatever it was that I was doing I hid the tacks in stars inside the drawing of Hogwarts. 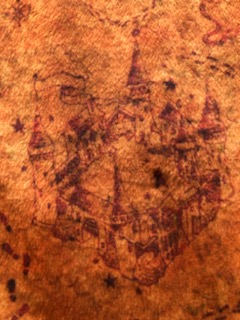 There is a special kind of self-conscious stress involved when your sewing skills rival a 4 year old’s and the recipient is a legit wizard-seamstress. At least you can see the love, I suppose. 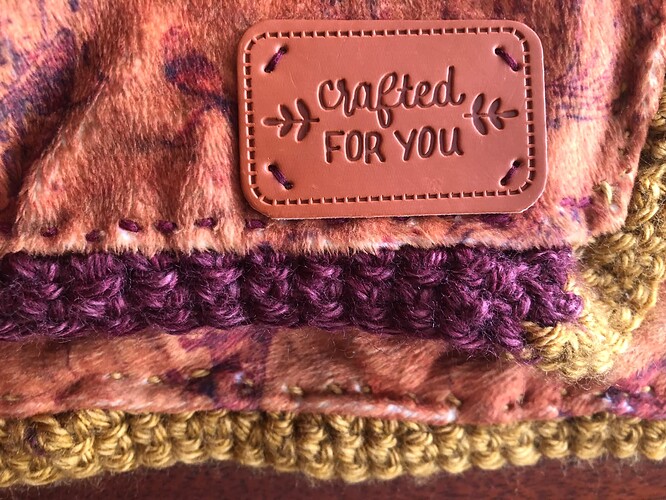 It ended up being about 40” X 35” and mostly squared up. Hopefully it’s homey-wonkiness doesn’t make her mother’s eye twitch to look at it! Haha.

What a gorgeous labor of love!! SO pretty!

I feel like you way downplayed how awesome The Thing was! What a great gift!

Thank you so much!

Oh my word, the Thing is amazing!!!

As a knitter, I will attest that entrelac is not for the meek…wow…what an undertaking…I am not even sure why you were joking that it was not a big deal…it is!

…and you hid the tacking in the stars…THE THING lives up to its reputation!

The Thing is amazing! I love that you chose to craft from a skill set different to Ada’s mum and even though it was tough, you persevered to make something special!

I tried entrelac once. Once. The Thing is much more than just a thing. YOU MADE A WHOLE ENTRELAC BLANKET! I heart this many more times than just once.

This is amazing!!! I’m so impressed with your skills.

The Thing definitely lives up to the hype!!

It’s gorgeous, and I know how hard it is to knit this. The backing is a great choice as well, very fitting. And Ada will need it now she’s moving to a colder place!

You guys are so kind, thank you so much!

This is amazing! I have not even been brave enough to look up how entrelac works because I can see it’s a lot of flipping work, much less for a blanket-sized thing! This is so perfect for Jennie and Ada. Bravo my friend!

Just excellent all the way around and anything but anti-climatic!!

A treasure made by hand!

The Thing revealed!! Did not disappoint! It’s absolutely amazing! That yarn looks beautiful, the design intricate, and the extra step of the minky backing?

A truly worthy gift for any wizarding family, but seriously perfect for Ada B. YOU are a wizard, my friend!

It’s beautiful! I can’t even imagine just how much time went into it, but it really is awesome!

Not just a wizard but a madwoman.

And hiding the tie points in the stars was an inspired a stroke of genius.

Welcome to the world thing. You live up to the hype and i can’t wait to see the next viral lettuce crafty story.