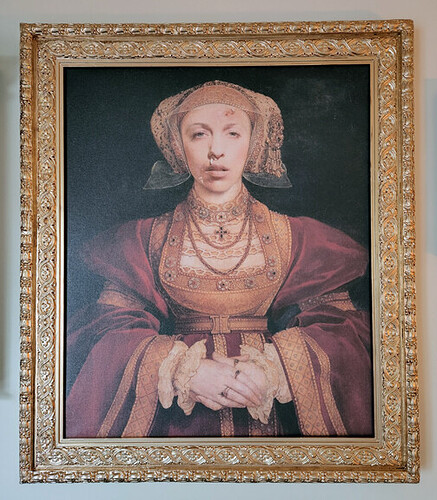 For xmas this year, TheMisterT gave me a print-on-canvas that is my zombified face (from, like, a dozen years ago) on a portrait of Anne of Cleves (Henry XIII’s 4th wife). We call it Tara of Cleavers. And yes, those are paper clay maggots coming out of my nose. 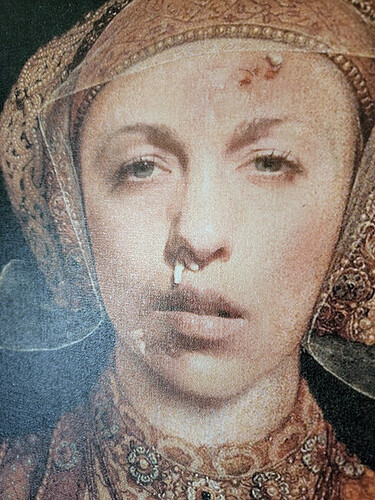 ANYHOO, it kind of needed a big, ol’ gilt frame which I could not find in the appropriate size my local thrifting/antiquing nor in my budget online. 20 x 24 is a standard size, but not a common size, especially in vintage or antique. Then I found this 20 x 24 at Goodwill. 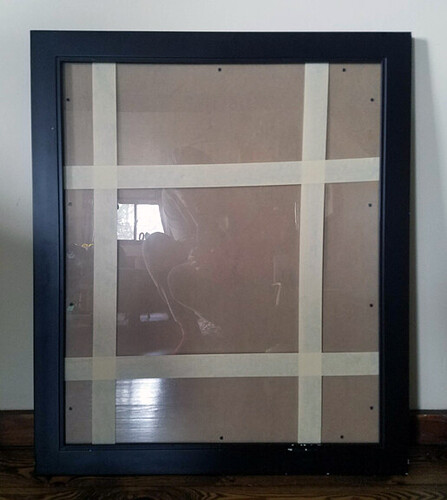 I figured I could gaudy it up! And I did. First I added some width and depth with some 1x2s I had around. They’re glued and nailed on. 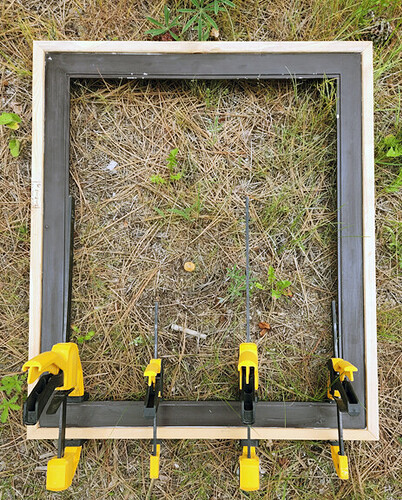 Then I used this Iron Orchid Designs (IOD) mould and paperclay to make the elaborate details. I followed the suggestions that IOD gives on their website to make and attach the pieces. 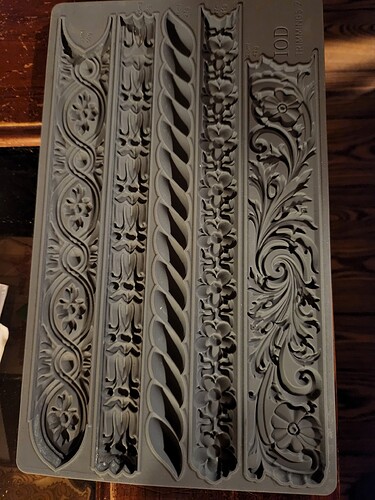 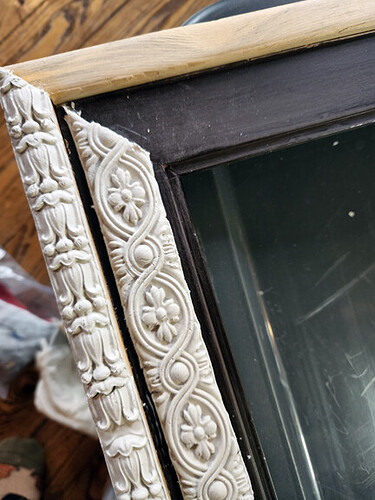 Because red is the traditional color under gold leaf, I painted with red oxide acrylic paint… after priming. 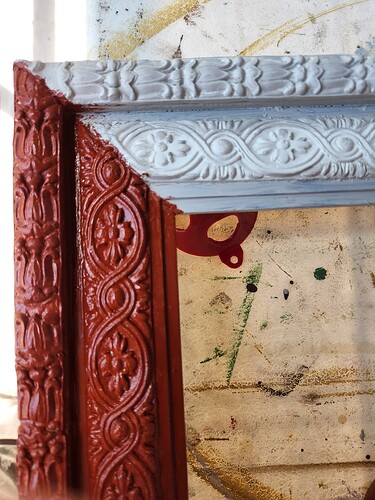 Even though I knew I wasn’t going to use gold leaf and instead used gilding paint from Michael’s - their house brand, I believe. 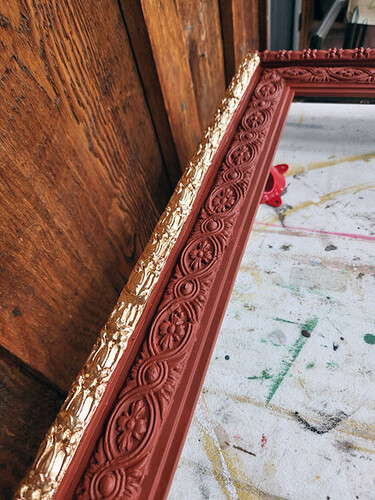 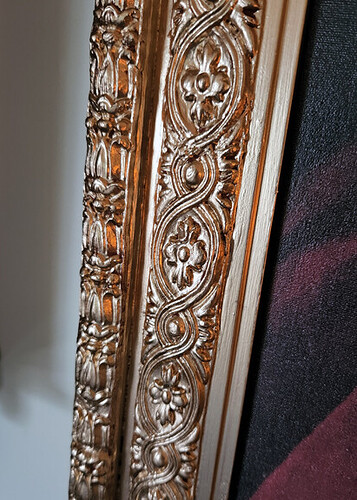 I still need to apply an acrylic, spray varnish, but that’s going to happen later this week if we get a warm, dry day.

I gotta say that I would normally feel really uncomfortable with a 20x24 portrait of myself hung in my house, especially in the public areas. But the way it is displayed gives it less focus and this is kind of hilarious and not obviously me, so… HA and YEY!

This is so epic!

I love this! Great job on the frame

I just don’t understand how you do so many amazing cool magical things. And, like, it always comes off like "I was thinking that I needed this really specific thing and then I dug out some sticks and a little glue and * Presto * I have this amazing high quality solution that looks like it cost an arm and a leg. (Get it? Zombie attack? Not funny? OK, I’ll see myself out.)

I have this amazing high quality solution that looks like it cost an arm and a leg. (Get it? Zombie attack? Not funny? OK, I’ll see myself out.)

You’re so kind! Maybe I should’ve made it clear that I searched and researched over the course of weeks - months, really - to figure out what I was going to do, especially because I didn’t want it to cost an arm and a leg (drum roll crash), because the figuring it out and finding what I thought I needed at the prices I wanted took WAY longer than actually putting it together which probably took 8 hours over several days. But I did dig out a couple of sticks!

If that’s the case, I’m going to need a cooler hat.

I just don’t even have words for this. It is freaking amazing!

Haha!
(Cut to you glancing around casually, seeing a fabric placemat you’ve kinda gotten tired of seeing in that capacity, bippity boppity boo you’ve got a fancy hat with handmade trim and some feathers that weren’t even in your house 5 minutes ago.)

Edit to add: It is totally apparent that there is a lot of thinking and skill involved in your wizardry. I don’t mean to minimize the work that goes into your awesome stuff with my jibber-jabber. It’s just always so cool and so, so varied that it feels like wizardry from this side of the screen. (Plus, we don’t actually see the moment you slice your thumb on soda cans and stuff, we can believe it’s all magic.

You have been really inspiring me to look around my house and finally (8 years in) start doing some of those redecorating ideas that I’ve been mulling/pinning over. I love seeing all these different projects.

OMGosh I’m dying over here… you guys crack me up!

And your frame looks amazing!!

I had to read this twice- so much to learn, bookmark and file away for future use. That explains the reddish whatever on the frames at the thrift stores and estate sales.
I have primed with grey or yellow. Question 1- Can my inherited cast iron cob shaped corn bread pan be used as a mold? Question 2- if I made a corn cob frame would that be funny or would that be me insulting the person in the frame? Nice work!

That frame is amazing!! But I’m super interested in how you ended up with the zombie portrait of yourself

Amazing!! Blown away by the ingenuity!

@AntBee Oh my goodness, this is all so nice of you to say! I would love to see your projects! I was feeling… antsy or something… awhile back when I realized that I have lived in this house for almost 10 years which is the longest I have lived in any place as an adult. And that after almost 10 years, it’s totally reasonable to redecorate a little bit! So I started doing it and feel much better.
Now if I only had cloth placemats, I might have to make a hat just for the giggles!

@SillySlippers Thanks! So long as the medium you’re molding will release from the cast iron, I don’t see why you couldn’t use it! The makers of the mold I used suggest corn starch or arrowroot. I used corn starch as we have it on hand. And I think it would be hilarious to use it to frame someone!

@PrincessP 'Twas a Christmas gift from TheMisterT! Inspired by the portraits shown in the opening sequence of the What We Do In The Shadows TV show.

The frame turned out graet with the reddish undercoat.
I have to laugh because I just commented on your other post how I have lots of artwork in my living room as well, and I also have a portrait of myself. Hahaha! Mine is a lot smaller. It’s a sketch an artist friend did of me in my 20’s. This zombie one is incredible!

Hahaha! Mine is a lot smaller.