The Fire Chief arriving at the scene of a fire! 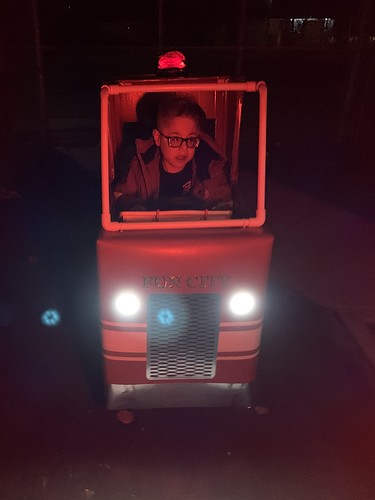 My husband and I created this fire truck for our son. DH created the frame and body and did the spray paint work and I came up with the details. 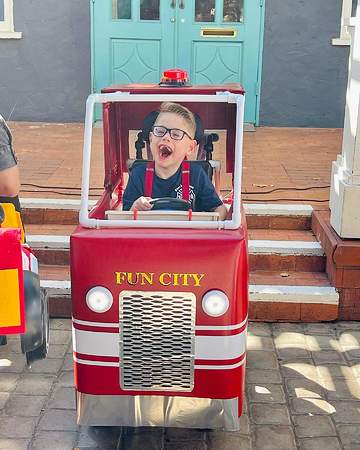 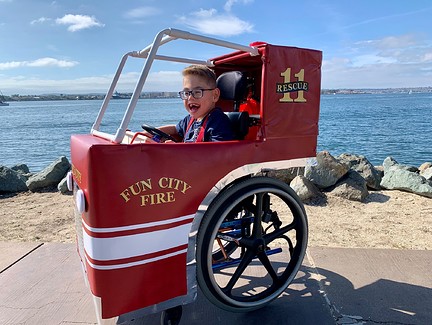 The frame was created with 70 feet of pvc pipes. 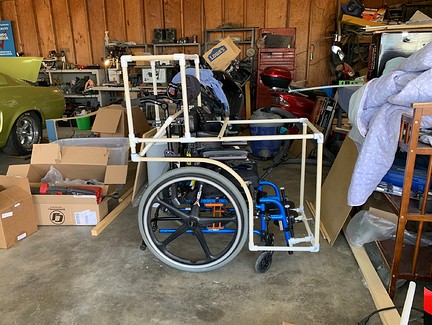 LittleBookLover is getting strong and has no concept of the destruction he can cause, so DH wanted to make sure the entire thing would be able to withstand pushing, pulling, prodding, yanking, etc. He constructed the frame with a support in the back and used hose clamps on the footrests to secure the whole thing to the wheelchair. It turned out to be well engineered and was able to withstand LittleBookLover’s attempts to pull himself up using the windshield.

Once he had the frame, the hubs used polywall (a plastic wall panel) and a heat gun to form the bottom part of the body. The top part of the body (Rescue 11) was made using an Amazon box that just happened to be the perfect size for the frame. The frames were attached to the bodies using zip ties. 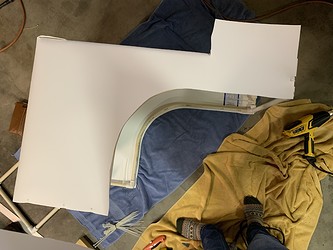 Once the body was constructed and painted it was up to me to flesh out the details. I used my Silhouette Studio program to create a mock-up of the fire truck and was able to test out different designs and sizes until I had something I was happy with.

The chrome bumper and trim were made with silver wrapping paper and attached with spray adhesive. The white stripes, ‘Rescue 11,’ and ‘Fun City Fire’ decals on the sides were made with vinyl from stash (it’s kind of hard to tell in the pics, but the gold vinyl is layered on black to give it a shadow effect). The ‘Fun City’ on the front of the truck was made with gold holographic paper and black background vinyl. I used Silhouette Studio to create the grill design. First I made hexagon shapes and then I used them to create columns and rows to create the overall grill effect. The grill design is cut out of silver wrapping paper and layered over black wrapping paper to create the finished look.

My husband came up with the idea of using battery powered stick on lights for the headlights and we picked up a red flashing light for the top. The red flashing light had a car adapter plug. DH was able to convert a drill battery into a battery with a car adapter socket that we were able to plug the flashing beacon into (seriously, that’s why he was the technical director/head engineer for this project bc I am clueless on how to do such things and in all honesty, if I had made the truck body, it probably would have been made out of cardboard

LittleBookLover’s outfit consisted of a pair of pants that I added reflective trim to, a navy shirt that I added HTV designs to, a pair of red suspenders, and a toasty red jacket that I added some patches and reflective trim to. With his wheelchair harness on, you wouldn’t be able to see much (if any) detail on the front of the jacket, so most of the details were added to the sides. I used my embroidery machine to stitch out the patch designs and hand stitched them to his jacket. I am terrible at hand stitching (which is a bit funny because it seems so darn easy) and it took me fooorever to stitch everything onto the jacket, especially the reflective trim on the sleeves. I tried to just skim the surface of the jacket so that my needle wouldn’t even penetrate to the interior. Unfortunately, my attempts were unsuccessful and I can’t even tell you how many times I sewed the sleeves shut 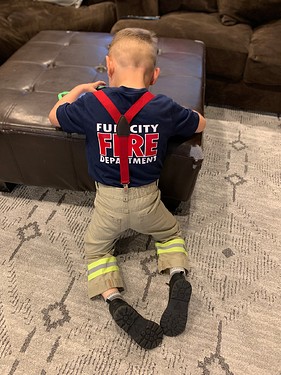 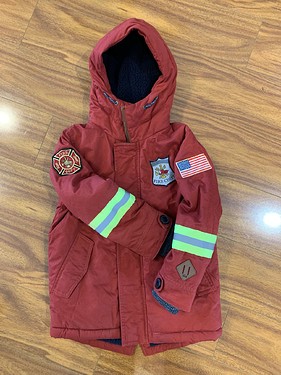 LittleBookLover loves toys and needs constant stimulation or he gets fussy. We came up with the idea of getting him a steering wheel toy to keep him entertained while in his fire truck and it worked out perfectly! I attached the toy to his wheelchair tray with bungee cords and it kept him entertained and as an added bonus, it added to the overall design of the costume!

Dying of cuteness! And Fun City sounds like my kinda town!

This is so cool! You two did a great job on this!

Cutest thing ever! And LittleBookLover obviously loved it. So impressed by all your effort!

This is amazing! He looks like he had a ball!

Holy five-alarm fire! Y’all are quite the team, because this costume is A-BLAZING! You really nailed just the right details for the truck AND the outfit! Not only does it look great, it is so well planned and constructed. If he has the same chair next year, you could probably reuse the frame, even. The best part is how thrilled he looks driving it.

This is the best ever!!!

Absolutely EPIC costume! So well done. Love the teamwork between you & your husband, and clearly DS had a great time.

This is so super cool! He looks so happy in his costume. Love it!

Thank you all for your kind words, I really appreciate them!

If he has the same chair next year, you could probably reuse the frame, even. The best part is how thrilled he looks driving it.

I had the same thought about the frame! There are so many costume possibilities that could incorporate a vehicle of some sort, but I tend to have a hard time coming up with anything. That’s why I started a list earlier today…mobile dog groomer, mobile zoo, Back to the Future Delorean…actually that (plus rockstar with a drum set) completes my current list

He was thrilled driving it! The steering wheel was a bit expensive for what it was, but soooo worth the investment!!

Here are a few more for your list:
Any sort of delivery truck (pizza, flowers, FedEx…), ice-cream truck (although that might lead to many demands for real ice-cream, so maybe not), train engine, tractor, if he likes Paw Patrol then any of their cars.
Anyway, it’s a mega cool costume, I’m glad he enjoyed it

Back to the Future Delorean

So many options! NASCAR or F1, some kind of wagon or carriage, Addams Family hearse, Ghostbusters, Cars (animated movie), chariot, if he likes dogs there’s that whole UPS Dogs Instagram/FB account thing… he could hand out treats to pups!

Thank you for the ideas @Tanath and @TheMistressT! I’m adding to the list! I like the idea of a pizza delivery and cracked myself up at the thought of using oregano oil in a diffuser to make it smell like pizza when we walk by

. I haven’t seen the UPS truck dogs and while LittleBookLover doesn’t really care about dogs either way, he’s my little pup (a nickname that he has definitely earned, lol)

Adorable! Looks like he was having the time of his life!

You did an absolutely fantastic job!!!