Every single one of those is fantastic, but I have no words to describe the glory of that alcoholic cat!

Yay, @roler, I’m so tickled that you love your magnets. I had a ton of fun picking out your themes and colors and Pinterest items. I debated back and forth between the Pokemon you had listed, and I’m pleased I ended up picking the one that had the most personal meaning to you.

I totally picked it because I know your love of eels!

I also received from @roler this weekend! Just had a chance to open everything up, take pretty photos, and get things on the fridge. 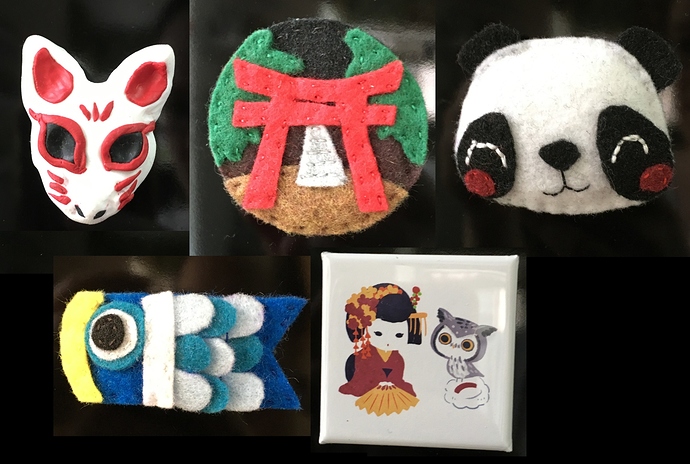 ~LOOK AT HOW PERFECT THEY ARE!~
Pardon the squealing.

Seriously, though, roler and I have chatted previously about both our time spent living abroad in Japan, and she used that to make the cutest things. From top left to bottom right, we have a kitsune mask (little forest fox spirit), a Shinto torii shrine in the forest, a precious panda (which totally counts, because he looks like Tare Panda, a cute Japanese character)!, a koi no bori kite (part of traditional Boy’s Day celebrations), and finally a sweet little maiko (geisha in training) chatting with an owl. dies of teh cute

Every time I think I have a favorite, I look at the others and can’t choose again.

Thank you, roler! You were an awesome partner AND a fabulous swap host.

That little inari mask is the first time I’ve used FIMO since middle or high school, so it definitely was a challenge to remember how to use it; noooo muscle memory left from that! But it was a fun opportunity to try clay again! I ended up going with that because I realized it’s actually pretty hard for me to make felt things under two inches! Most of my little felties are just a bit bigger than that. I made the koinobori and the torii as small as I could, and the panda I actually made earlier this year. As for the little owl one, I actually bought that a craft fair in Osaka! The artist there had a ton of things with her adorable owl drawings on them: playing cards, magnets, stationery, etc. There were so many adorable ones I picked up a bunch for myself and gifts.

Eep these are all so cute! I especially love the stego and am going to try to get someone to make me one

I love the theme of the set. Very nice indeed!

Aw, these are all adorable! You did a great job on the mask, especially if you had not used clay in a long time. And I do love the kite; my son still has the one his Japanese grandma gave him on Boy’s Day when he was a tiny baby. All the magnets are so cool!

I love the koi no bori kite!! So cute!

Geordi LaForge! From Star Trek the next generation. I saw him on AuFish’s pinterest and Told her how cool her was.

Squee!!! Geordie!!! You are so lucky!!! Esp paired with the taco-saurus! Great job, @AuFish!

Is anyone else compulsively checking this thread to see if the International Mail fairy has decided to send a package in under 2 months? Nope? Just me? …

That’s so stressful, and certainly is the distant cousin of “domestic mail fairy” who seems to frolic around as well.

I received these fabulous magnets from Lilyleaper. I love them all. My favorite is the vintage sewing machine! Thank you so much, Lilyleaper!! 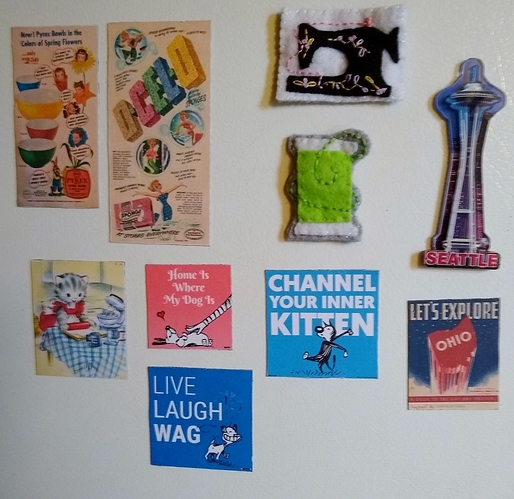 I forgot to say: She used my vintage ads, pets, and sewing themes. And a magnet of her state one
of mine.

Awww, what a fun selection! I thing my favorite is the spool, but the inner kitten one is awfully darling as well!

The hand-stitched ones are the coolest! I do love the vintage-y ones, too… Kitty with the rolling pin is very cute.

The felt spool is just so bright and I love the swirl.
For some reason, I’m really drawn to the Pyrex ad as well. Great haul!

this gallery is STELLAR! fridge magnets are my obsession. the quirkier the better.

i am in for the next swap.

It is full of cuteness.

Even though I didn’t ask, I was hoping for all different types of magnets and Ann must’ve read my mind (I did the same for her).
First: Mr. Snow Leopard. He (although it could be she since there’s no real difference between the two) is stunning and comes from a wildlife park in Sweden with only endangered animals. 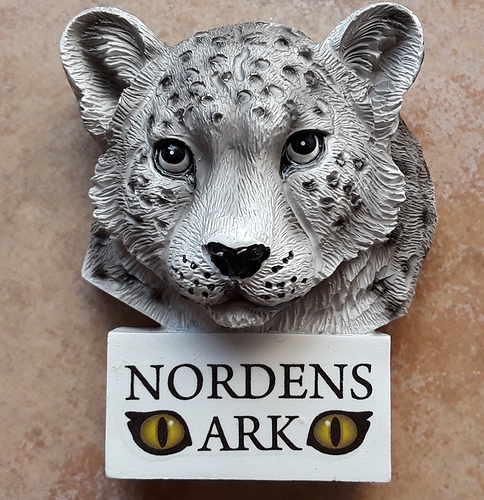 “Bob hanging around” is for my minion fanatic mom and she loves it! Spot on with the different color eyes and his “roundness”.

His goggles are even metallic! 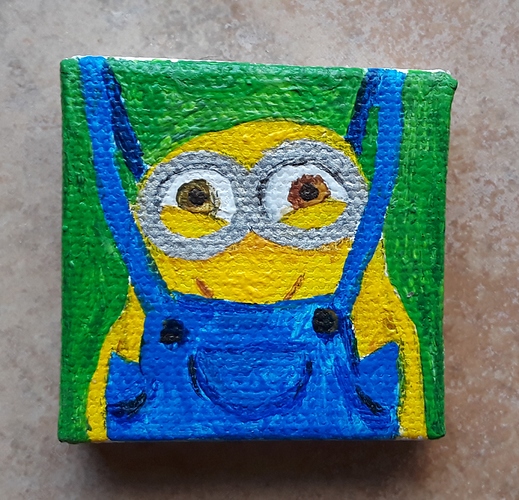 Ann ran with my industrial chic and mixed media themes and came up with this tiny canvas that has so much goodness squeezed into it, I want to enlarge it just to look at all of the details. She even enlisted her DH for the paint job. SO COOL! 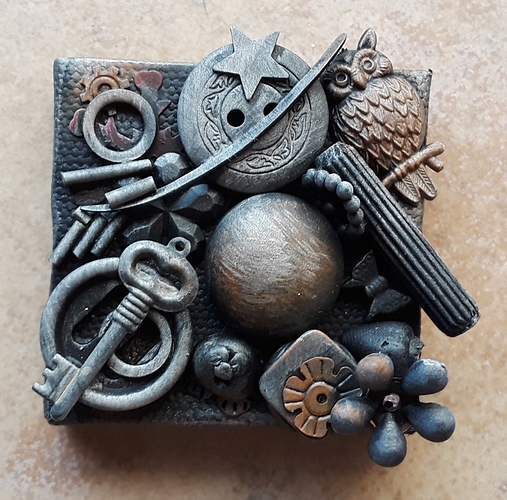 Ok, this one had me laughing out loud… I had jackalope on my list. They make me laugh, and growing up in AZ some visitors were convinced they’re real. Spoiler alert, I wish. This cutie is the Swedish version of jack. Meet Skvader, a hare and female wood grouse. I love mixed media (have I said that?) and I love the fact that it was used on what is essentially a mixed media animal. The cool part is, they were invented one town over from where Ann grew up. 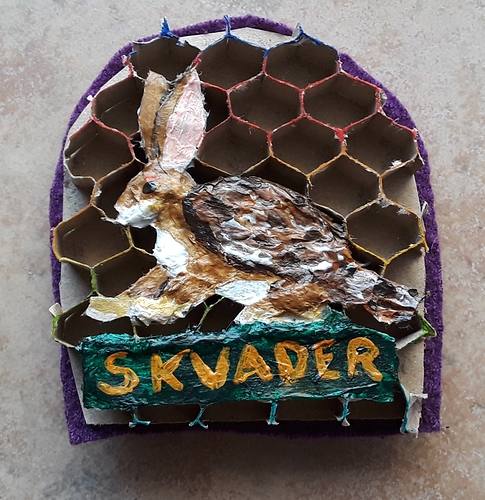 Last but not least, is my forever cat Mason. If I ever swapped with you on c-ster, you’ve probably seen her. I’ve received great art of her over the years but this one is by far the cutest interpretation of her. She is made of paper clay and sturdy. I had to take more than one pic so you could see all of the wee details. 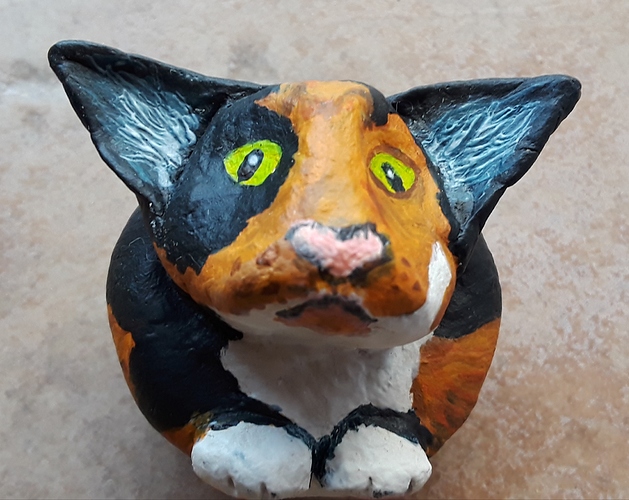 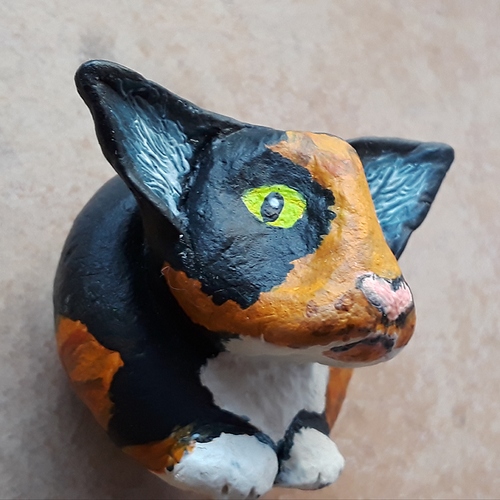 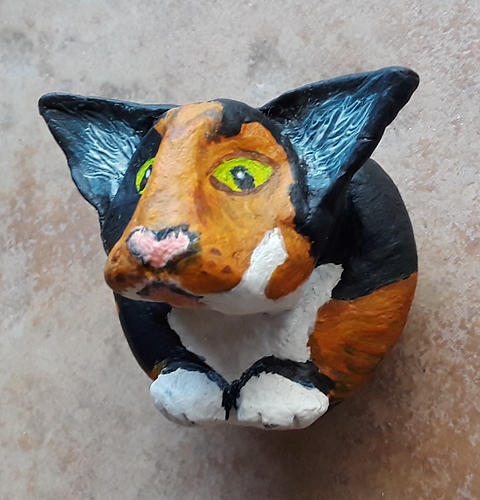 Here is a group shot. The fridge lighting isn’t nearly as good as the floor by the giant sliding glass door.

but don’t worry, they’re there! 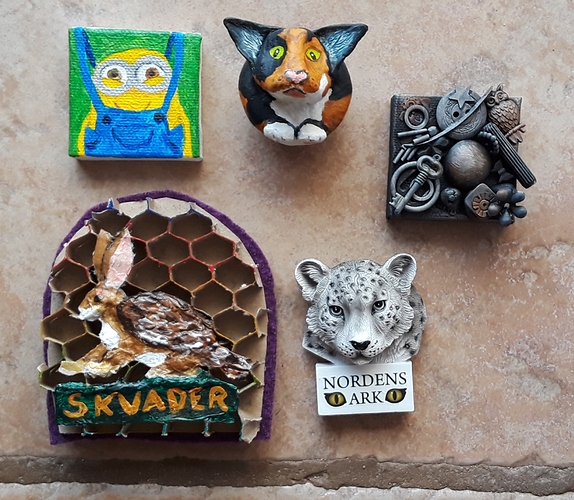 Thank you for spoiling me from afar Ann, and sending with it a bit of Sweden. Fingers crossed the mail will be less snail and more intentional so you can get yours!

Oh wow, that mixed media collage is wonderful! love all the layers!