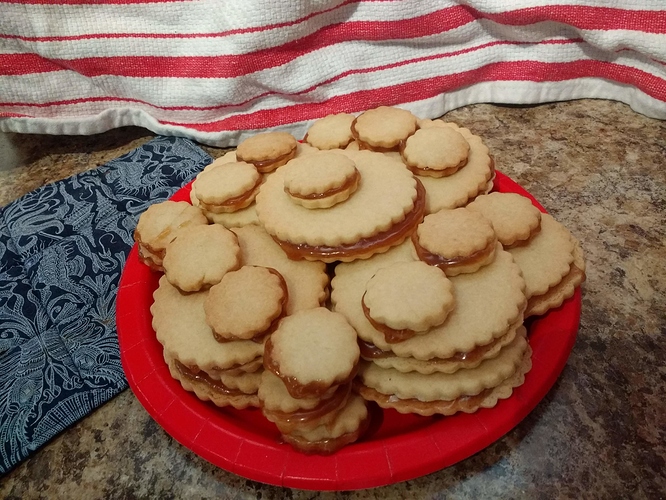 People have been telling me how delicious stroopwafels are all week. I don’t have a stroopwaffle maker or a pizelle maker or a waffle cone maker, so I decided to make some stroopkoeken instead to see what all the fuss is about. They are indeed delicious…and now I want to go to the Netherlands. Maybe someday!

They look delicious! What is the filling?

I always try to send a pack of stroopwafels with my swaps!!!

They look delicious. I actually love stroopkoeken more than stroopwafels because my grandma always served them. Now I’m craving them!

). I’ve never had stroopkoeken but looks like I need to fix that. The oozing filing has me drooling!

There is some of that my little pony fabric on the way to you!! But I don’t think that one includes stroopwafels

Oh my gosh, I forgot about that!!!

Me too!!! Then I found the parcel in a bag I hadn’t used for a while and dropped it off. And then I forgot to tell you.

My mum always said that I was lucky my butt is attached or I would forget that too! (That’s a real proverb where we live)

YUM! They look and sound so good!

The filling is a caramel made with maple syrup (because I didn’t have any stroop and it isn’t available around here), brown sugar, butter, and cinnamon.

We will have to swap someday! I was trying to find a good place online to order some stroopwafels for the Tompten to bring the kids this year (we have a family tradition of the tompten leaving a scavenger hunt clue for the kids in one of their shoes on Christmas morning if they leave out a bowl of milk and a bowl of porridge on Christmas eve. At the end of the scavenger hunt there is a sweet treat and a tompten related small gift of some sort.) We had a kind person in Norway send us some Tompten gifts and sweets in the past, but I didn’t ask this year due to covid. I could order Daelmans stroopwafels online, but some people have told me they aren’t the best so I am undecided if I should.

That’s a nice tradition! In the Netherlands children find their gifts in their shoes (although not at Christmas). I love how all those old traditions are intertwined but also a bit different everywhere. Tomten are a bit similar like our kabouters but we don’t associate them with Christmas.

The best stroopwafels are those made fresh at a market stall. They are massive and you eat them hot. Nothing compares to that! I don’t think there’s anything particularly wrong with Daelmans, but we can’t buy them in the grocery store as far as I know. You get them with your coffee/tea in a cafe. I usually send Kanjers because it’s the only brand that comes in a flat pack instead of a roll. But honestly I haven’t come across a stroopwafel I didn’t like yet!!

I think maple syrup is probably a very good alternative to stroop. Or maybe golden syrup if you can get that where you live. I know Americans make apple butter with similar ingredients as stroop but in pictures it doesn’t look the same. When cold, stroop is much thicker than maple syrup, but it’s definitely syrup and doesn’t look like jam or peanut butter.

Yes, it is definitely a mishmash of traditions from my parents heritage, lumped into Christmas to keep us kids occupied with a scavenger hunt for a good part of the day I think. I looked up Kabouters, they are indeed very similar to tompten.

I got golden syrup for a recipe at a specialty market once, it was very expensive and didn’t seem to alter the taste much, so I usually use either honey or maple syrup now ( I also always have those on hand).

I will definitely be trying your pie recipe! So far we have loved every dutch recipe we’ve tried. Pannekoek are a particular favorite and are often a birthday treat in our house.

Have you tried raw herring yet?

Our typical dinners may be a bit boring but we have a massive sweet tooth. I will try to remember to post some recipes of things I’m baking for the holidays! We eat pannenkoeken a lot, we bake fluffy American pancakes a special treat. Pre-pandemic, we’d invite friends over for pannenkoeken brunch quite often. We’ve had that tradition since we were broke students + the recipe is easily adaptable for people with allergies.

At kids’ birthday parties, pannenkoekentaart is a thing! It’s a stack of pancakes with a layer of stroop, cream, jam or whatever you prefer between each pancake, and then it’s cut in slices like a cake.

But I need the recipe you used… drools