Challenge chain, post your completed challenges here, and chat about the challenges

Here’s my reply to @Lynx2Lancer’s kindness challenge! My kiddo has to wear masks at school and he wanted plain black masks stenciled. He was particularly anxious to advertise his YT channel to his schoolmates, so the kindness comes in with the advertising masks. Those are the “sub to” and toad logo masks. 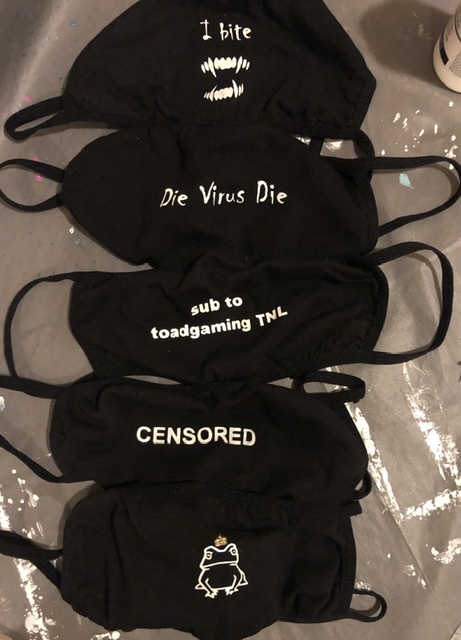 I completely dropped the ball on my two challenges… but I still have plans to do them! Motivation has been seriously lacking, but the negative things have calmed down a bit, and while I’m going to be very busy in the weeks ahead, I can still get it done

And, I love the stenciled masks!

For @Bunny1kenobi’s challenge of holiday, I sorta-finished my 2020 holiday cards:

These have been in the works since @crafty-becky sent me a bunch of winter bird stickers in a past swap. They may be my holiday cards this year, or just go out in swap packages during winter. In an attempt to blend the stickers in, I made a mess with various stencils, handmade stamps, and markers on and around them. I pieced together often inappropriate found phrases (inspired by Effin Birds and the overall feel of 2020, though there wasn’t very strong language in the book I’m pulling text from…

I completed @calluna challenge today. I set a timer to stop every thirty minutes and just be mindful. It was good.

I made this necklace and matching earrings, I have no creative urges at the moment, zilch motivation, so I dumped all my green beads into a pile and made a random necklace. 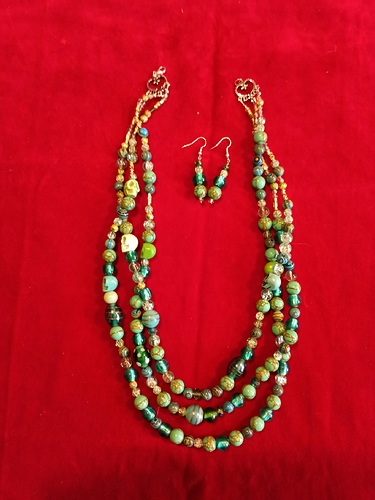 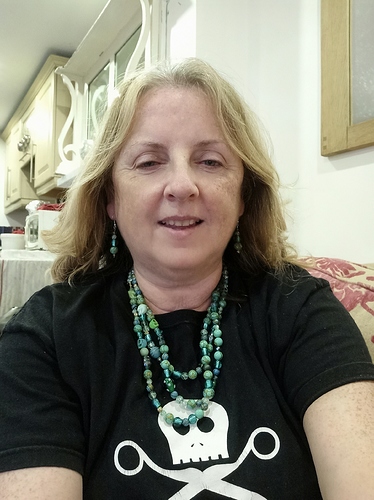 Wearing it with a deadster tee. I’ve just realised that the skull beads match the tee

Looks good! I was just wearing my Deadster shirt over the weekend, lol. Take care of you, and if the crafty motivation is off on holiday, that’s okay… It always returns in its own time!

Hello! I took @thanate’s challenge of FIRE SEASON. I made a watercolor postcard of the moon. 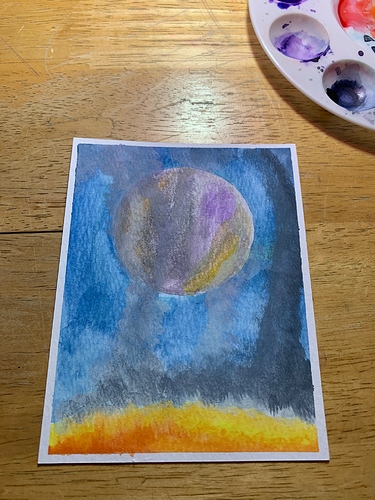 It was been a very hard week, but shortly after 3am there was a loud clap of thunder and then rain. Beautiful rain. One of the things I did to cope was watch movies like Total Recall and Dune and paint moons. Here is my Moon and Other Planets collection: 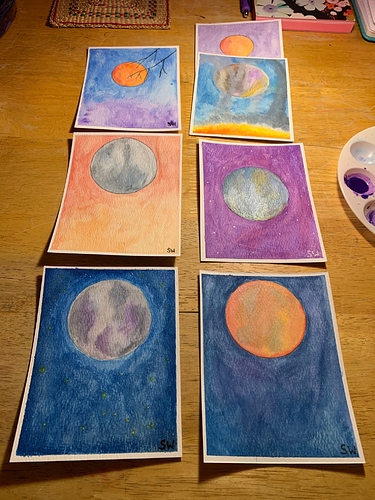 Today is a better day. Hardly any tears so far!

The smoky scenes really resonate with me (I live in a damp climate now but come from wildfire country). No matter what hellish nastiness is going on, there’s that occasional moment when you catch a full moon rising above it all, and the sad, still beauty in those moments can shift things.

Here is what fluffy underwater television looks like to me…Perhaps what I did is more correctly described as “underwater fluffy television”, but we all have other things to think about.

I started with fluffy television: 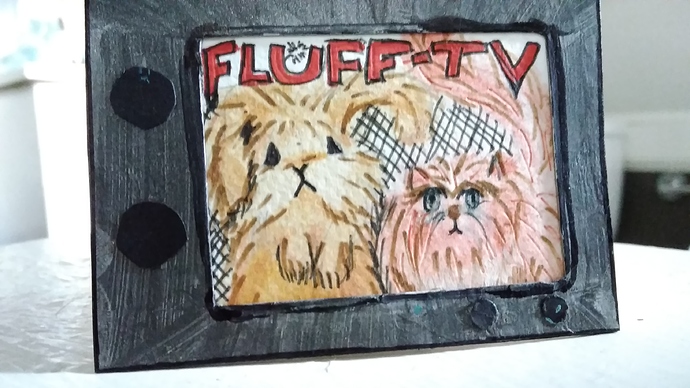 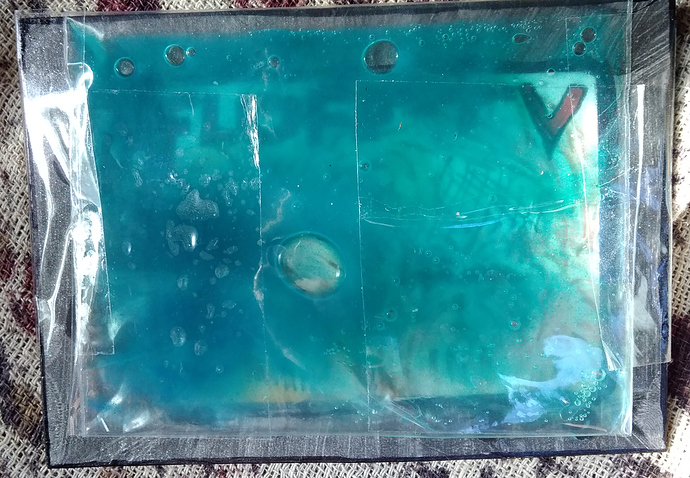 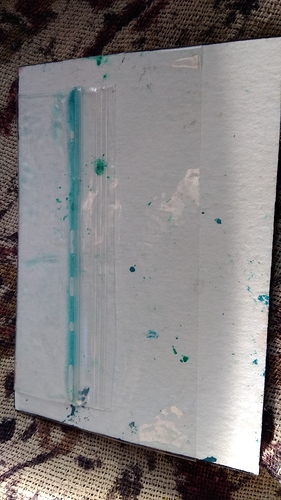 cut out a frame to contain the water: 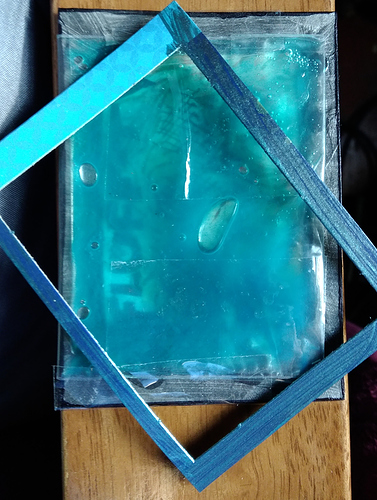 And hot-glued it in place; you have to squish the liquid around to see the fluffy tv underneath: 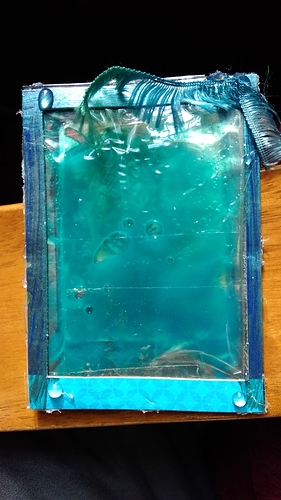 I’ve never made a liquid component in papercrafting, so it was a learning experience. For one thing, I used far too much goo for the size. And it would be way cooler if I had glitter in there. Even if it had turned out perfectly, I would still be too scared to send it in the mail in case it ruptured, so I don’t think I’ll do more ATCs, in particular, with liquid inside!

Your fluffy underwater television is SO COOL!! Love it

I crafted this little chunky chunky house for fun. I had the wood blanks cut years ago and it just needed sanding and painting. Some paper, more paint, bits and pieces and here we are! 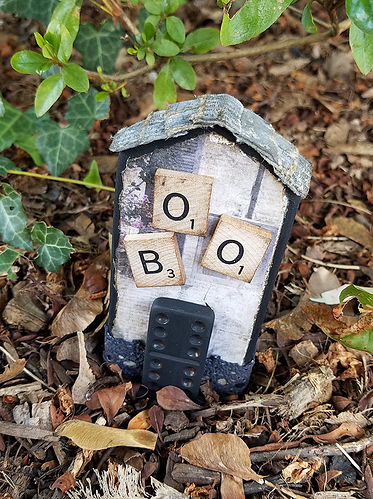 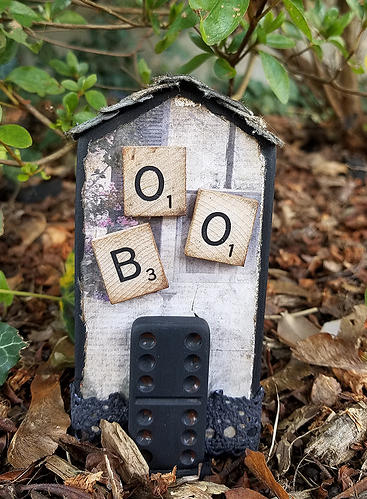 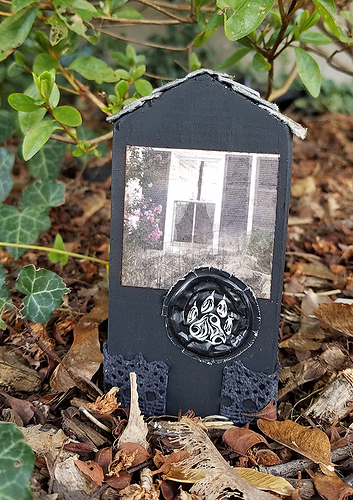 Well… I’ve been reading a bunch of poetry, but nothing crafted yet. He he.

Okay, I know that this was from months ago, but I finally finished my SPIN challenge from @AuFish.

I made some spin art background pages for a project. 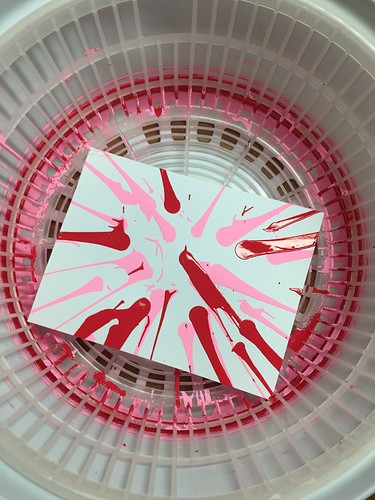 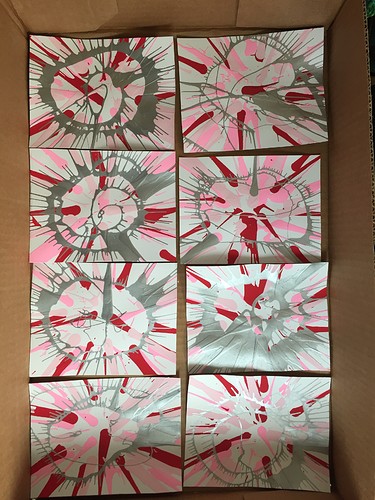 I still have one more challenge to make (Starry Night, I think it was), so the challenge from @marionberries is still up for grabs- Squirrels!

I am so intrigued by the spin paintings…does it waste a lot of paint? They sure are pretty and I bet fast…reminds me of those spirographs in a way that we did as kids…

Hey friends, I asked Edel about a new thread for 2021 and since it is currently her bed time she suggested I get it started (and that anybody may run with this theme in future years if they ever feel inclined).

It does waste some paint, but if I had applied it differently, it might not have been as much. It wasn’t a ton, because it didn’t even drip out of the bottom of my salad spinner. And, it was pretty fast, but I let each color dry in between. I didn’t even think to apply multiple colors at once. More things to play with!

The colours are totally perfect for the season!
I tried a friend’s kid’s (haha) paint spinner thing, I have a couple set aside to use for backgrounds. I never thought of a salad spinner but now I want to mess up ours with paint. It’s non-toxic, right?

I think the paint is non-toxic, but it doesn’t actually specify it. I would guess that if you washed it thoroughly, it would be okay. But, to be safe, I’d hit the thrift store!

We’ve been in lock down for ages and it’s not ending any time soon. How I miss the thrift store, sigh.