I made this diorama as a bit of fan art from TheMisterT’s first novel, Dr Potter’s Medicine Show, back in 2017. Having just finished a fan art diorama for his second novel and having shared it here, I decided to share this one, too! 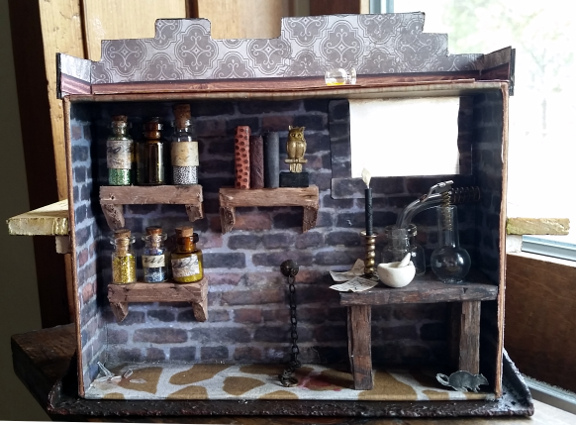 Here we see a cutaway of the Hedwith household with the laboratory in the the basement directly below Dr Morrison Hedwith’s study. The wooded sidewalks are visible at street level on the exterior of the building along with the sidewalk-level window. To the endless detail shots! 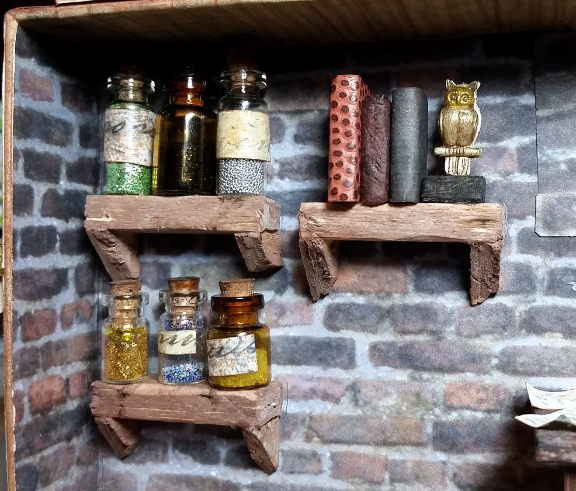 Shelves loaded with mysterious alchemical ingredients and reference books. The owl bookend is made with a vintage charm painted brass and mounted to a small piece of the same balsa the crude shelves are made from. While there is no owl in the book, TheMisterT assured me that Morrison would have loved it, because owls represent wisdom and he considered himself to bear that trait. 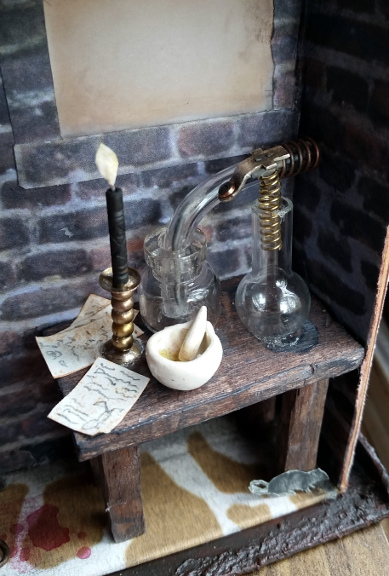 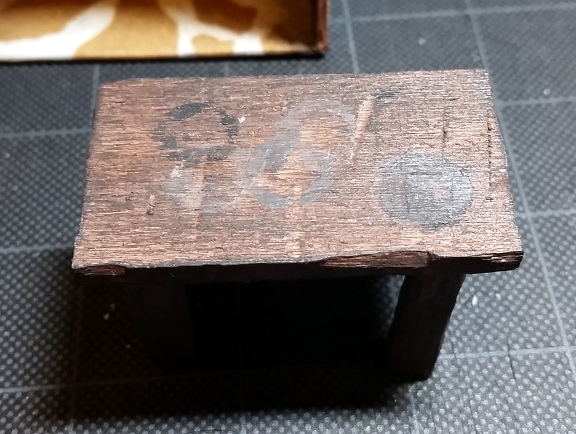 Dr Hedwith’s work table. The surface is stained and burned, then covered with the tools of his dark secret trade. The mortar and pestle is made with polymer clay, painted to stain. The candle is from various beads and findings stacked up and topped with a painted tissue flame. The lab equipment consists of various miniature vessels, plastic tubing, and metal bits I’ve scavenged over the years. You can see that the equipment vents to the exterior: safety first! 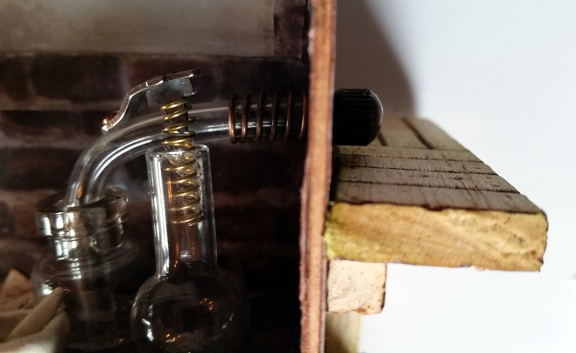 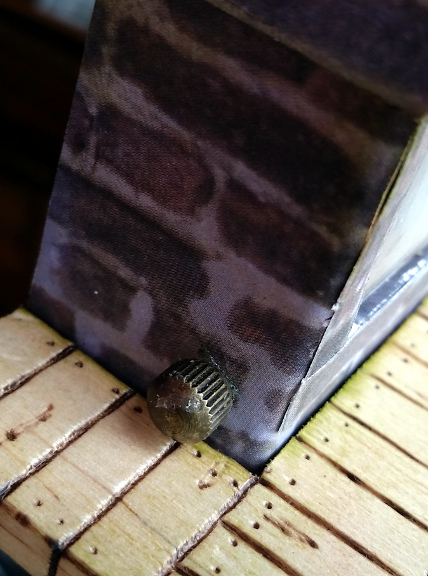 Oh, the the blood that has spilled for Doctor’s mad science! 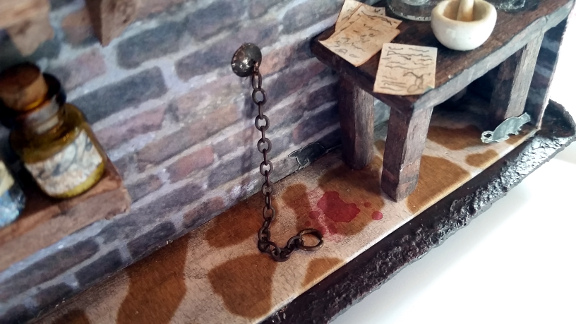 And the madness that grips him, caused him to throw a bottle of failed elixir against the wall, breaking the bottle and staining the floor. 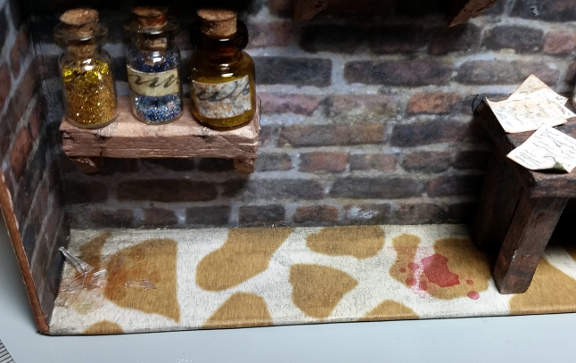 Finally, the carpeted floor of Morrison’s study above the lab where he enjoys a nightly brandy. This references a scene where he loses control of his rapidly failing body, dripping his glass. His servant cleans it up after helping him to bed. I included a dimple in the carpet where the Doctor’s chair has been moved! 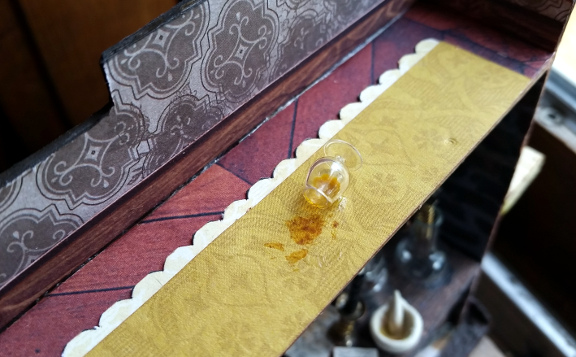 Of course, I had to carry my details to the exterior/back. We have a shelf of TheMisterT’s book “accouterments” where this sits and I turn it around every now and then to show the back. 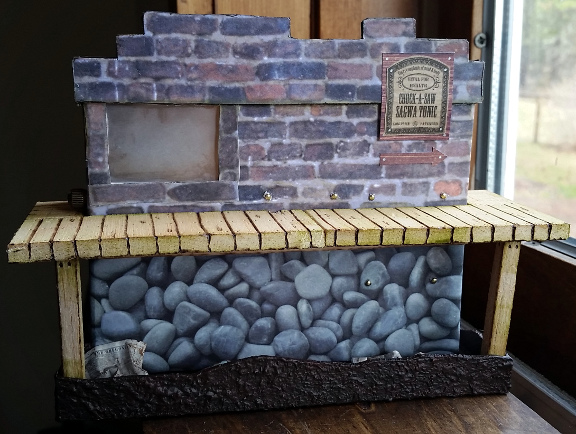 This part of Dr Potter’s Medicine Show takes place in Portland, Oregon in the late 1800s which had raised wooden sidewalks. I grew up near Portland and was always fascinated with the brass things attached to and coming out of the old buildings, so I added the vent (above) and left the nail heads that support the bookshelves exposed. The sidewalk-level window is filthy and obscures the evil that goes on within. Of course, there is a sign offering for sale the miracle tonic to keep up appearances. 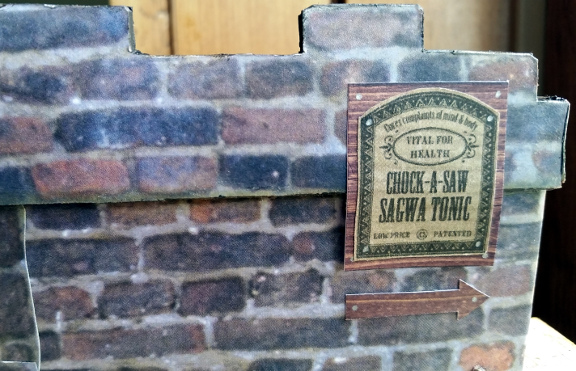 Below the sidewalk is some accumulated trash including a couple of local newspapers. When looking for such, I found one from my hometown which is less than 20 miles west of Portland, so I included it, too. There’s also a crushed tin can and a bottle of “Potter’s Canadian Whiskey” which I could not resist buying when I found it. Dr. Potter definitely has a drinking problem, but who can blame him all things considered? 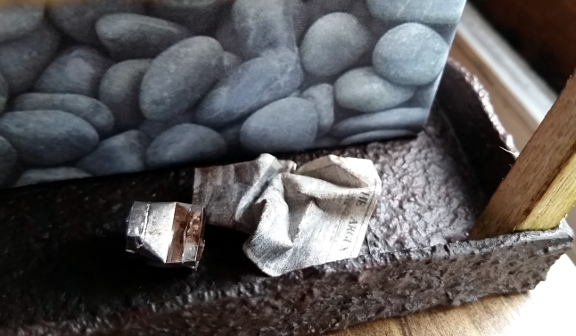 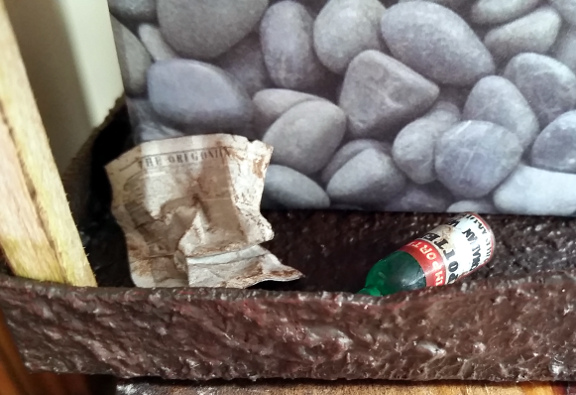 Underneath the sidewalk are the project and maker info. 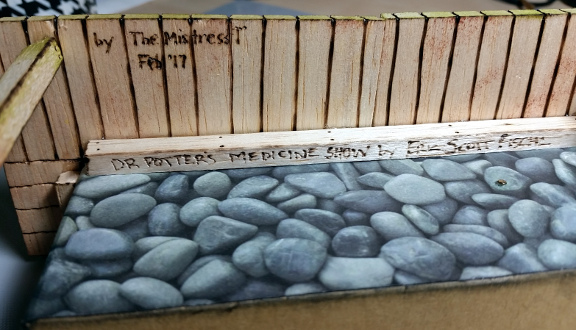 And a little bit, I couldn’t help myself with on the inside is the smoke stains on the ceiling over Dr. Hedwith’s work table and in the corners from the long hours of burning the candle. 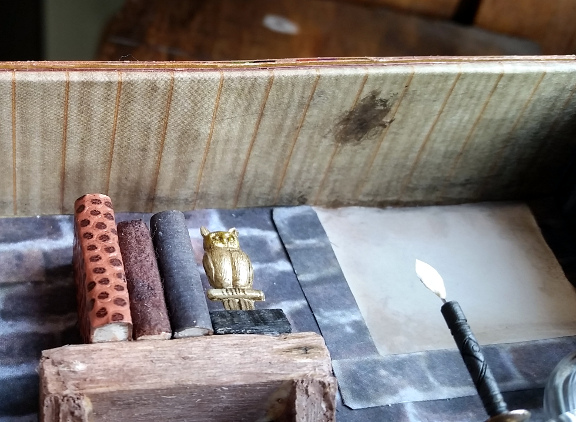 It is SO COOL! All the teeny scary wee details, gah. You are a mini-making genius.

I bet he LOVED it!

Thanks, friends! I had a bit of fun revisiting this project through all the dang photos. HA!

You are a mini-making genius.

Let’s not get carried away!

Aaaa!! ALL of it, but especially the lab equipment!!! And not just the level of detail in how everything was made, but all the little intentional details that have meaning from the book…that’s the kind of geeking out that fills my heart with joy.

Thanks, @calluna! I get so much fun and satisfaction out of the details and “story telling” parts of these projects!

Amazing! Rings on the table, candle spot on the ceiling… you think of everything!

Haha! This is perhaps why projects like this end up taking WAAAAAAY longer than anticipated. I just keep thinking of things! Sigh.

Loved the book, love this project!!!

I love the little details: the smoke stain, spilled brandy, broken elixir bottle, manacle, trash in the gutter, tonic for sale sign… ah, it makes my heart happy because not only is this an amazing miniature scene, but you took it next level! You are a genius at this stuff!

I would hit that heart button a gazillion times if I could!

@Bunny1kenobi Oh YOU! Share yours if you feel like putting in the time, because it IS AMAZING! You manage to actually MAKE you miniature pieces!

What fun!! Love all the details!!

How fortunate for us who love miniatures and such attention to details to see two different takes on this…glad you both collaborated and posted! It sure makes coming here a thrill to see such talent…love them BOTH…love love!!!

Your work is just so insanely epic. This is fantastic! <3

So, so cool! I love all the tiny details, and how there’s something to see from every angle and view. Beautifully made my friend.

DANG! That is awesome!

Oh my goodness, you guys! THANKS SO MUCH!