TheMisterT has a birthday coming up, so I finally got around to making a fan art piece for his second novel, The Trials of Solomon Parker! I’d collected some of the key bits for this over a year ago, but the rest is stash. 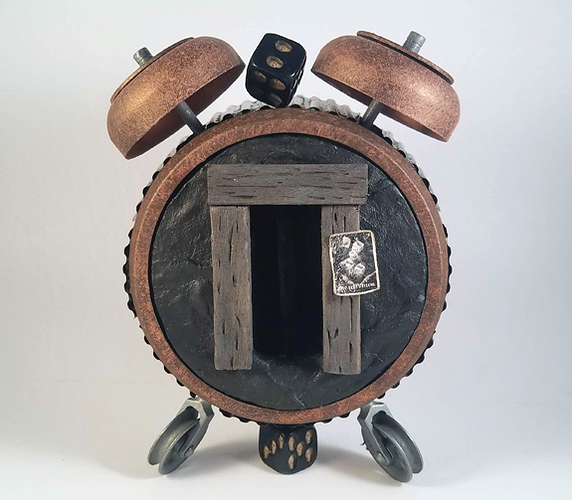 Buckle up, because I took a ton of detail pics, because planning and making the details was most of the fun!

As you can see, it was built in a old-time alarm clock-like blank from Tim Holtz that I modified, refinished, added-to, etc. It’s meant to reference the copper mine in the story, the clock themes reference some time-jumpy stuff… 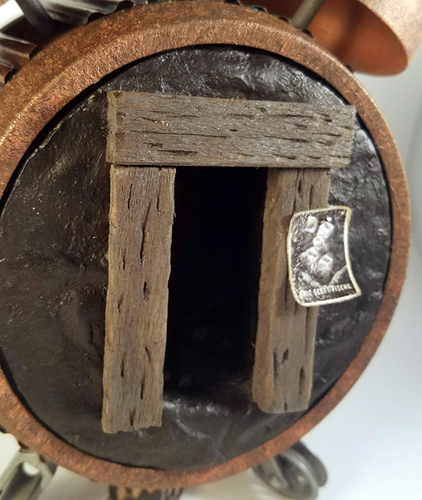 There is a side tunnel in the back. 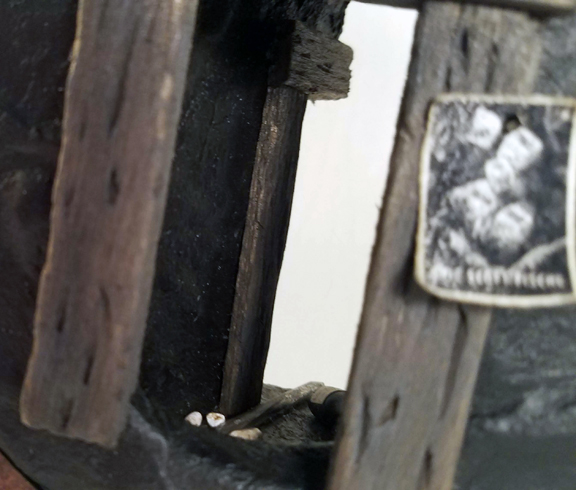 Old, small bones and a whiskey bottle on the mine cart tracks. These both reference things in the story. 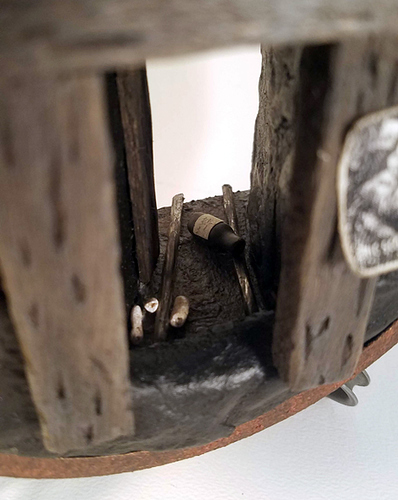 The exterior has some copper Luster Stone over brown paint, also on the bells. Then I embossed some pieces of thin sheet copper that I patinated and attached. The clock faces are more Tim Holtz pieces. I also refinished the posts the bells are on. 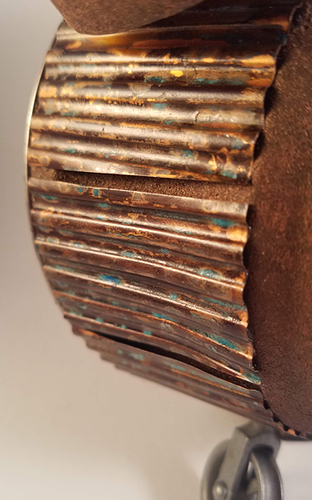 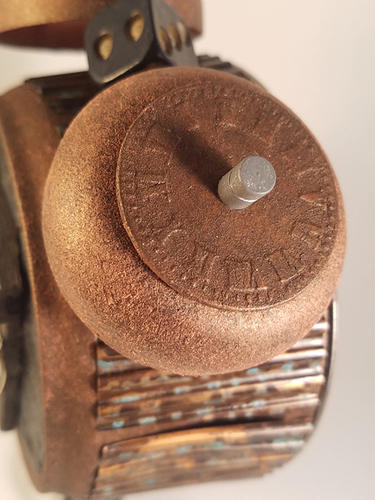 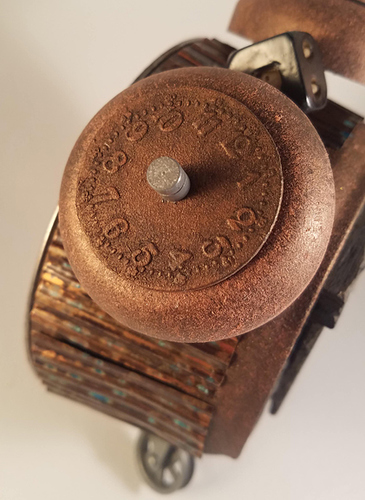 I found these cool resin dice without knowing exactly how I’d use them, but they work so well with the story I had to get them. I replaced the alarm hammer-thing with one on top. 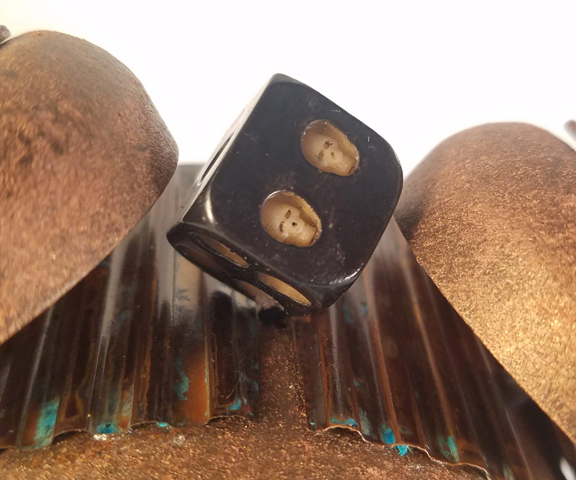 I replace the clock’s two feet with these pulleys (more Tim Holtz) because they look like mine cart wheels to me! They are taller than the feet were and roll, so I needed a third “leg” to support the whole thing and used another die. 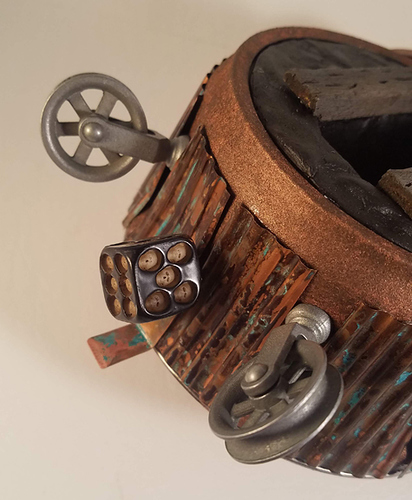 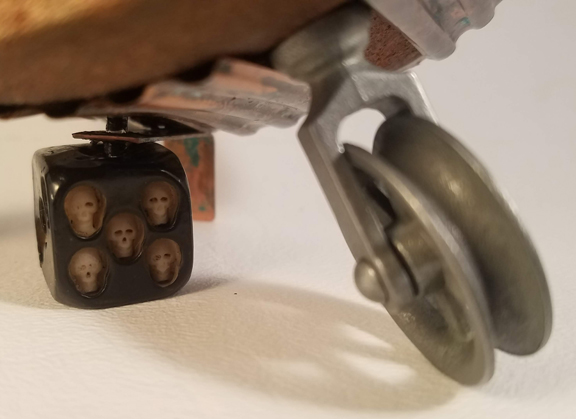 Moving around to the back! Originally there was a ring in the center to pull off the cover which I replaced with a clock key (Tim Holtz). 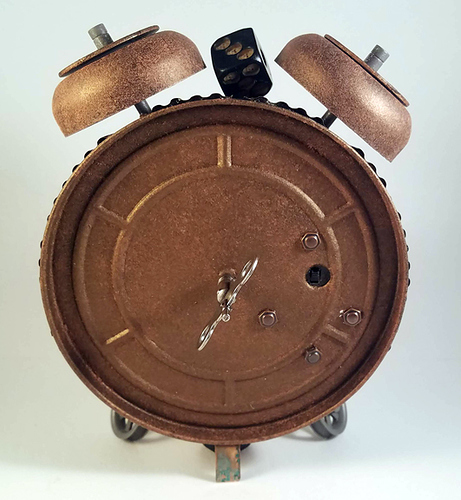 You can see there’s a little switch there, too! All the little “bolts” are part of what supports a holster for the light on the inside! The holster is made from a metal cap from a bottle. The light is a partially disassembled LED tealight. It’s the flickering kind and is meant to make it appear as though there is a fire in the mine - a big part of the story. 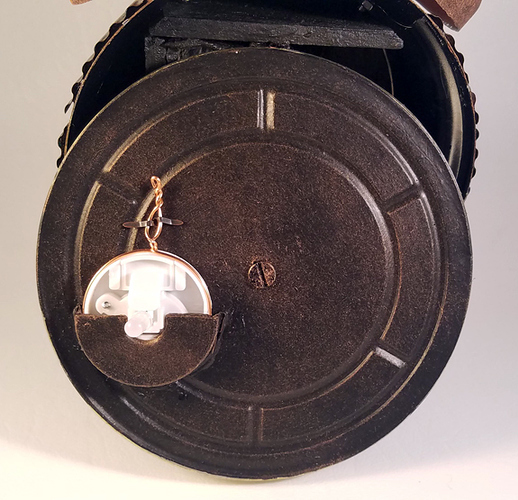 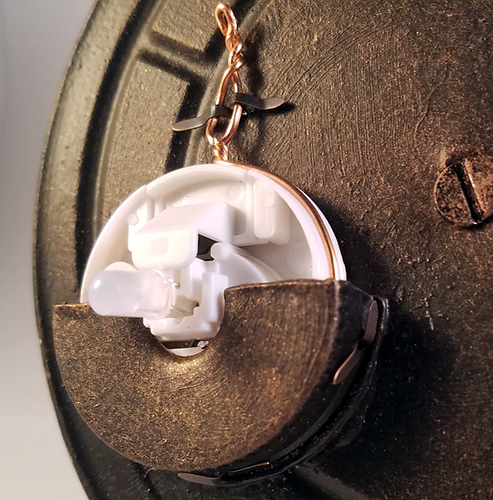 It’s all set up so you can remove the light rig to replace the battery. Because of that, I put a bunch of details into the inside back there that you won’t see unless you take the back off. 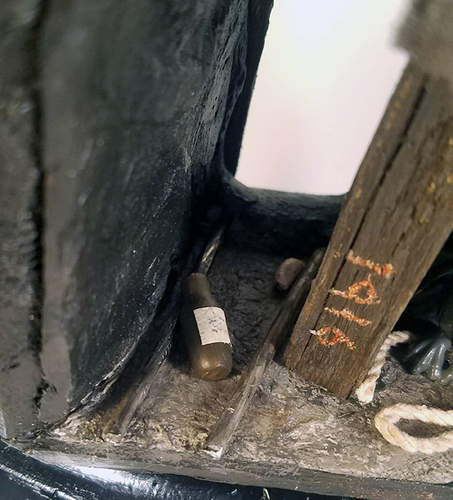 1916 is the year of the fire, carved into the lumber supports of the mine and another shot of the whiskey bottle (painted polymer clay with a paper label).

The next photo references the assassination of Frank Little a real life Labor organizer who was murdered in real life in Butte Montana during the timeframe of the fictional story. It also gives a nod to an animal who is associated with the “bad guys” and the supernatural part of the story. And it utilizes some graffiti to paraphrase some dialog that contains some rather intense cussing, “fuck you sheepfucking lumber cunts”. Consider yourself warned, Dear Crafter. 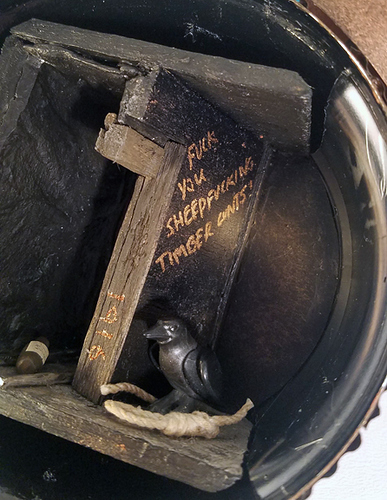 This is the back of the whole thing, with the cover removed. You can see how the structure I made inside the clock body hides the LED, but allows the light to flicker into the mine shaft and be visible from the front. 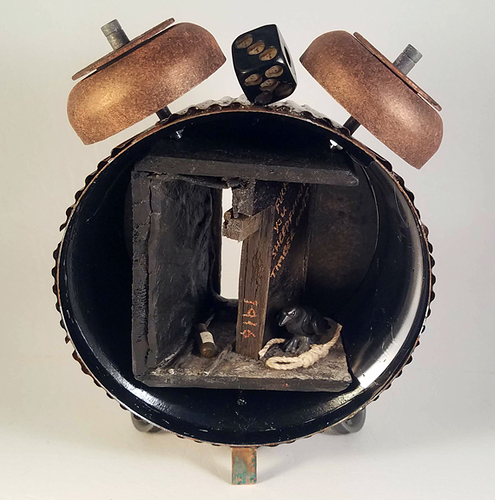 I tried to make a little gif of the flickering light coming from the depths of the mine. It’s not that great of an illustration of it, but let’s see it if works anyway. Of course, it shows better in dim light, but I think you’ll get the idea.

Now I’ve just got to wait the 2 weeks until his birthday. Sigh. I did make this box to wrap it in, which I’m pretty tickled with, too!

ADDENDUM:
At @Magpie 's urging, I went and made a thread for the diorama I made from TheMisterT’s first novel, Dr Potter’s Medicine Show.

I am so impressed by the sheer amount of details you managed to pack into this! This is absolutely amazing and such an incredibly thoughtful gift!

I’ve seen pics of the dice and the caster wheels and wondered what you were working on, but this far exceeds the possibilities that I’d come up with!

Wow!
Fabulous detail in such a small space. He’ll love it.

He did such a great job on that book, and this fan art… I mean… it’s absolutely beyond perfect for the story! Even if you hadn’t read it, this would be an amazing piece, but having read it… words don’t suffice!

The dice! The mine cart wheels! The bottle! The bones! The fire! That the whole thing is encased in a clock! Oh my.

Tara! That is incredible, so much detail and skill poured into that. You are a wonder.

Thank you, everyone! Since we’ve been home together sheltering-in-place, he has gotten to “see” just how much time has gone into this and even though I don’t think he has any idea what I have been working on, he is already impressed.

There are so many cool little parts I found to include, it was nice to be able to share them on the Snapshot thread!

He did such a great job on that book, and this fan art… I mean… it’s absolutely beyond perfect for the story! Even if you hadn’t read it, this would be an amazing piece, but having read it… words don’t suffice!

Thanks! I was hoping you’d see since I know you read it and we worked “together” on our Dr Hedwith dioramas! You can probably get how this book was harder to fan-art over than Dr Potter’s Medicine Show. It just wasn’t as BIG and showy. I think that’s why it took me so long to figure out how and what to do.

This is all kinds of wonderful!

Oh yes… this book was more … I don’t know… internal? Less corporeal? Hard to describe. I totally get what you mean. The actual places would be harder to pin down than either the lab or the carnival-ish setting of Dr. Potter.

Ok, this is fabulous. The book is on my shopping list!

The actual places would be harder to pin down than either the lab or the carnival-ish setting of Dr. Potter.

Yes, exactly! Somehow more existential or something? I even think calendars would be a more appropriate way to express the time shift stuff, but… clocks are easier, more available and cooler!

Thanks in advance! Every book counts!

Omg I don’t know how you can wait! This is so cool! He wrote this book? Again, so personalized! Its truly amazing and so thoughtful!

Thank you! Getting feedback here helps quench my desire for sharing it in person! And yes, he wrote that book! Also, Dr Potter’s Medicine Show.

Maybe we can talk @Bunny1kenobi into moving her awesome fan art for the first book over here… And yours too!

Fanart at its finest!

@Magpie I’ll do it! I haven’t been interested in reposting old stuff, but for the sake of fluffing out the diorama contingent I will! @Bunny1kenobi ?

ADDENDUM: I did it! Here.

Your mysterious posts in the Snapshot are finally revealed! Looking back, I now see the task you had at hand to make this wonderful piece! The tea light…the clock exterior…the wheels…everything is to the theme and so carefully executed!

Again you’re killing it with the million tiny details! So cool my friend, so cool.

Thanks so much, friends!

All the little details. So much attention and so much love. Good stuff here.