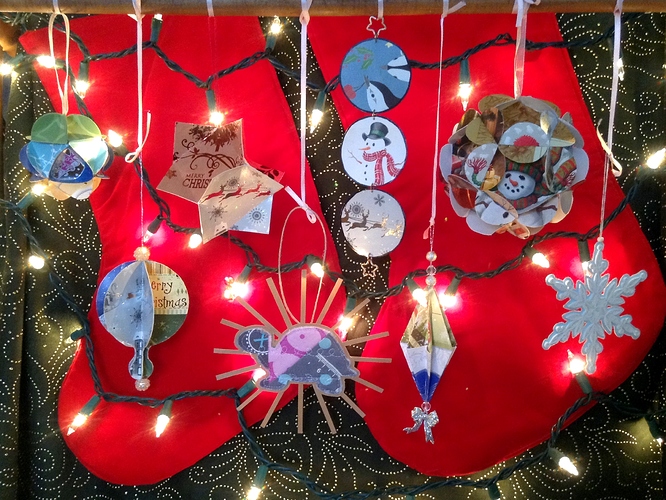 In 2013, my partner and my second year of living together, I used the holiday cards we received to make an ornament. That was the start of a tradition of repurposing these well-wishes from our loved ones to carry forward year to year. Now I’ve tried to diversify the patterns I use, but I will probably have to repeat myself at some point! 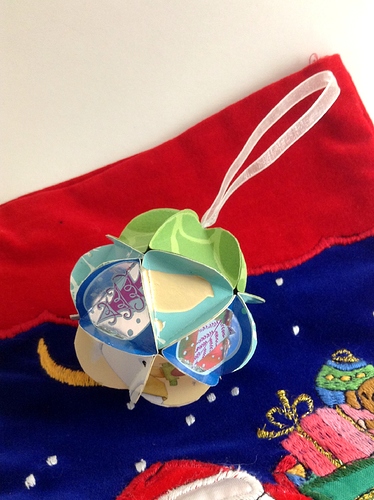 2013: Still one of my favorite patterns! I’d like to make this again.

To kick off the Christmas season, I've teamed up with Tawny and ten other wonderful ladies to give you the 12 Days of DIY Ornaments. Today'... 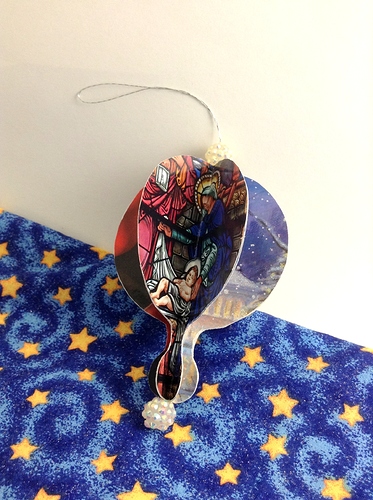 2014: No pattern for this one, but the construction is simple: Cut multiples of a bilaterally symmetrical shape, fold them in half, and glue the halves together. Before gluing the last section, thread a hanging string. 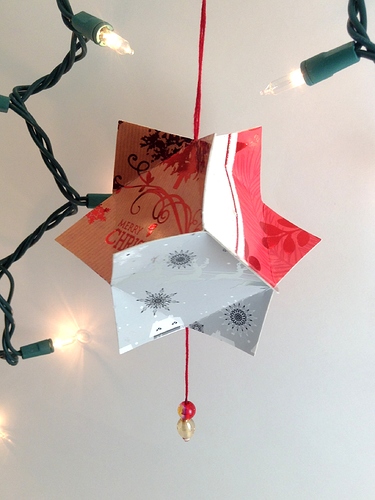 2015: The tutorial for this one has disappeared, but it’s also an easy one. Cut out 6 equal squares, and fold the corners of each to meet evenly in the center. Glue the corner tabs to each other to form a cube shape, threading a hanging string before finally closing the shape. 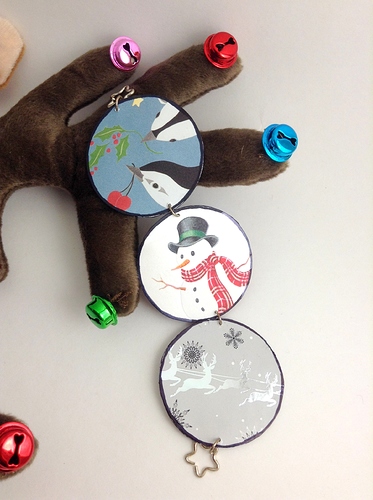 2016: This was a lazy one - circles of card glued together and assembled with jump rings and star charms on the ends. 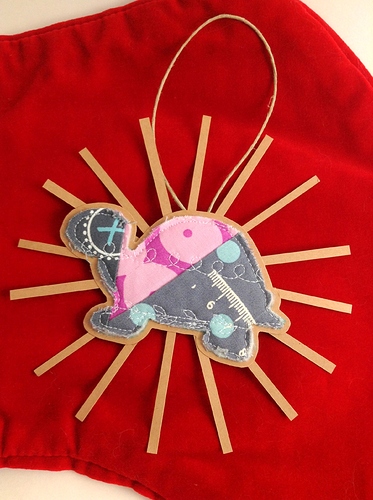 2017: I don’t know what happened to this year’s cards. Maybe we didn’t receive any? When I looked back for this post and realized I didn’t have a 2017 ornament, the completist in me wouldn’t let it go. I scrolled back through my old swap pictures to see if I still had any cards from the Sweat Shoppe Ornament Swap that year - and found in my stash a card from Thimbles71. Thanks for sending me a cool enough card that I saved it! I cut out this little turtle and some strips to arrange in a starburst. 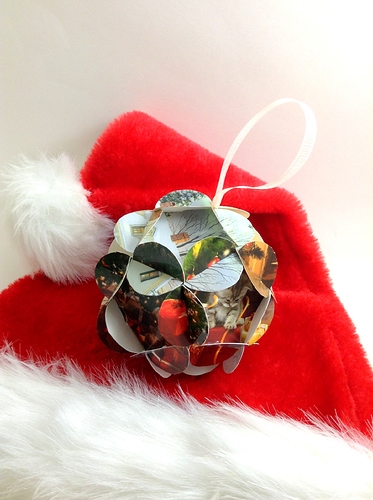 2018: This was a tricky one to assemble! No glue, the pieces just slot together. This is the biggest of the lot - I could have gone smaller, but that would be tough to assemble without ripping. Next time I would cover the back of these pieces in clear packing tape for added strength. 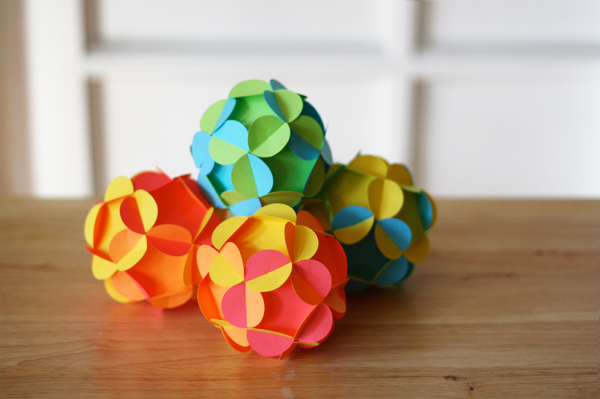 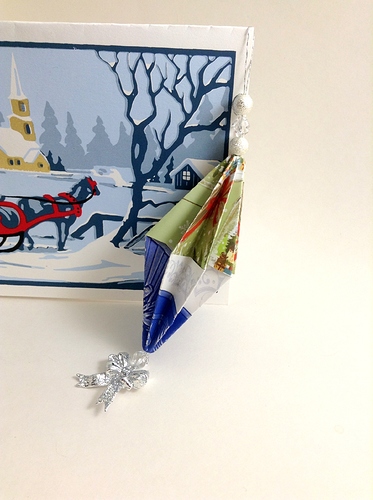 2019: I like the elegant design of these, and it only takes two pieces. Perfect because I received some cool dimensional cards that wouldn’t be easily cut up and folded. 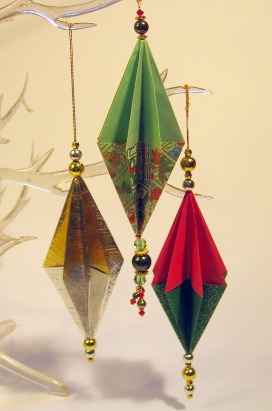 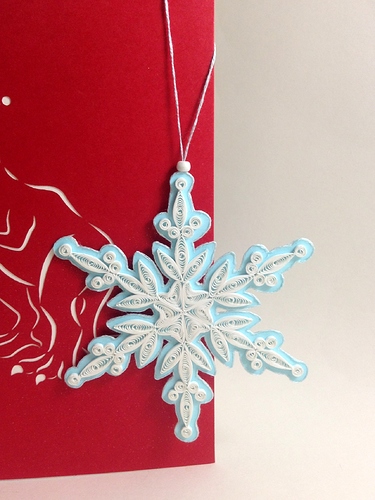 2019 extra: One of the 3D cards was this beautiful quilled snowflake. It took more time than I expected to cut around the design and glue 2 strands of embroidery floss all around the edge for a more finished look. In the end I really love this one though.

What a brilliant way to upcycle and enjoy your holiday cards every year!

These are great! I’ve thought about trying some of those patterns but never got around to it - seeing this post is definitely making me eye the box of cards I’ve held into with no real plan…

I’m a notorious saver of cards… thank you for sharing some great ideas to repurpose them!

These are so pretty! I love this idea!

What a fantastic idea! I always feel guilty about getting rid of the cards I get. Thanks for the links to the tutorials! Any suggestions for photo cards?

Ooo are they like photos of your friends and family? I would cut out the faces and put them on paper/pipe cleaner/popsicle stick bodies! Like elves or angels or grinches.

What a fun idea! And then, I could gift them back to the people who sent them

@AcadianDriftwood do you only use the cards for ornaments? I have made bowls and vases out of the cards…I really love that you do this as a tradition…they are all neat!

My mom used to make those blanket stitched bowls! I may try that when I run out of ornament patterns.

My mother made a whole bunch of your 2013 model when I was quite small, so there were always a bunch of those on the bottom of our tree where it didn’t matter if the cats stole them.

What a lovely thought and such charming ornaments!

What a great idea! I love these!

Thanks for that idea! I’m tucking it away for next year!

Fabulous way to reuse those cards, and a great collection of ornaments and memories!