I know it’s well past Krampusnacht and nutcracker season, but after is when I had time to focus on this guy! And you better grab a seat, because focus I did and there are A LOT of photos! 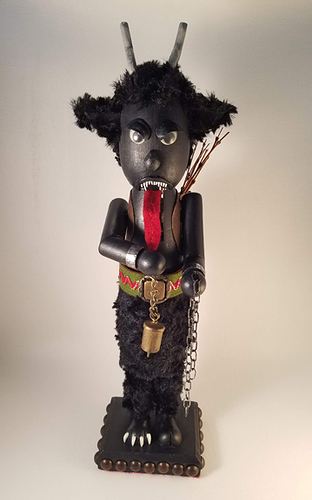 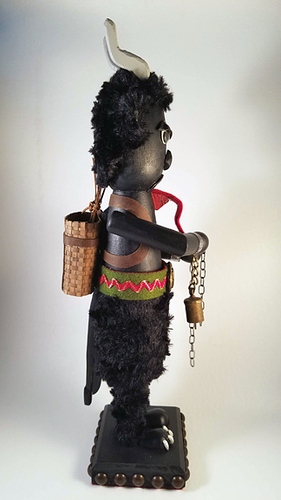 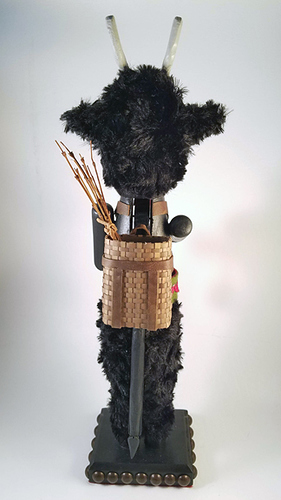 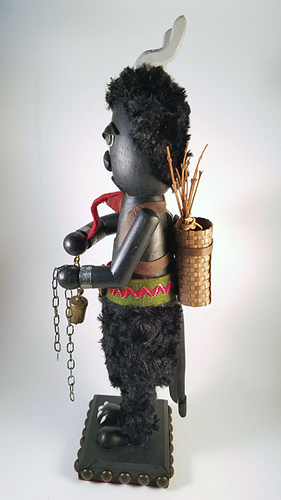 The original is a blank reindeer from Michael’s. I removed some parts to refashion and/or reposition. 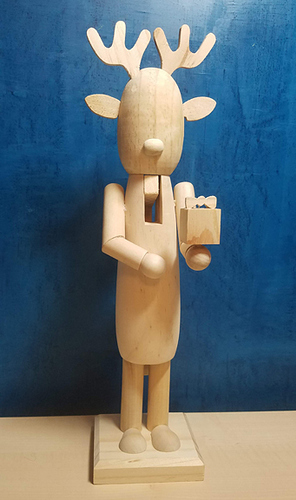 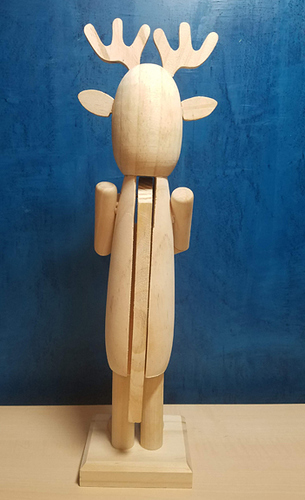 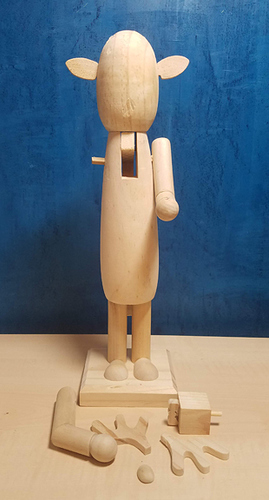 And now that I’ve shared the 360 and the history, how about many, many detail shots with many descriptions!? You bet! 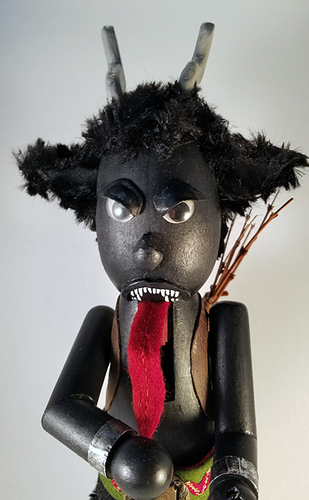 I did a bit of reading and LOTS of looking at images old and new. I learned that Krampus almost always has chained wrists, sometimes the chains are broken. I didn’t have a satisfying way to do that exactly, so I gave him shackles on his wrists and had him carry a chain in his left hand. In his right he’s carrying a bell. I but the bell on the chain so it wouldn’t block clear few of the belt “buckle” which I LOVE. 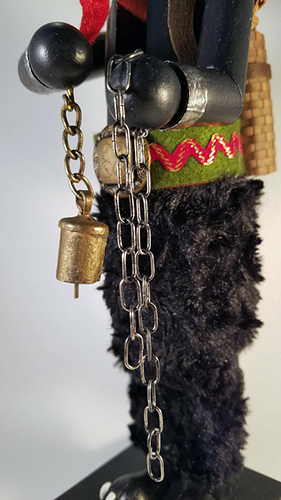 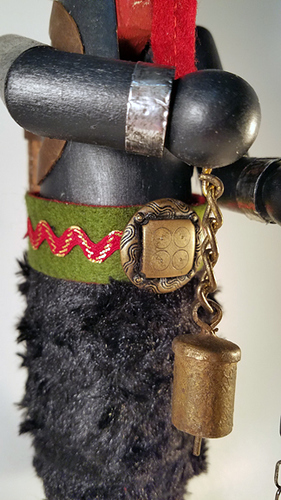 I read how originally/traditionally the Krampus has one goat hoof and one human foot, but also saw lots of images of him with more monstrously demony feet so I decided on one hoof and one monster foot. I added decorative upholstery tacks to the base for some added interest down there. 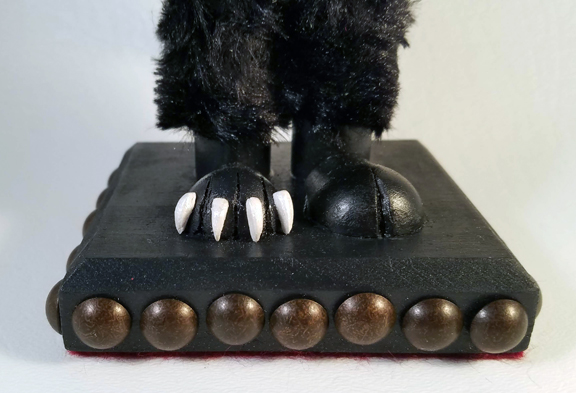 His pack has its own post (UPDATED! Miniature Woven Basket), because it felt like its own mini-project. It put a bundle of switches in it for torturing the bad kids, but left room for him to kidnap them, too! At the last minute it occured to me to make sure to position the switches so that they wouldn’t interfere with the nutcracking mechanism, even though this is NOT a real nutcracker and would not actually crack nuts if put to use. It’s very soft wood, etc. 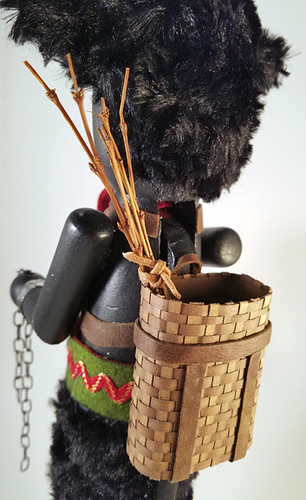 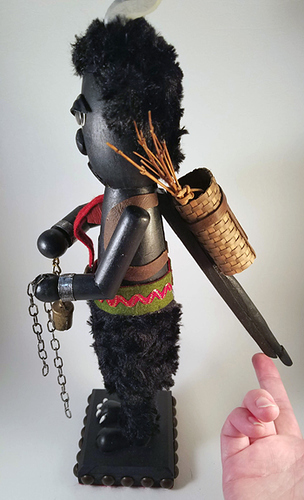 I did some deliberately crude carving: I made a tail out of balsa to cover the nutcracking lever and then cut away the original antlers to make horns. I also carved a bit on his nose and ears, but the ear carving ended up covered in fur. 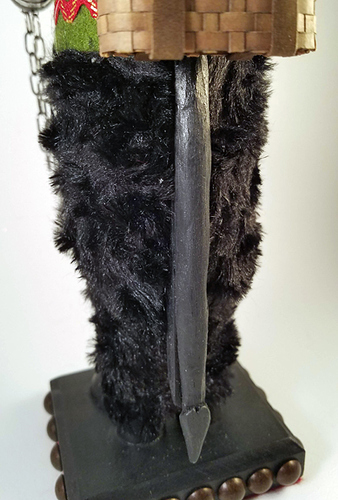 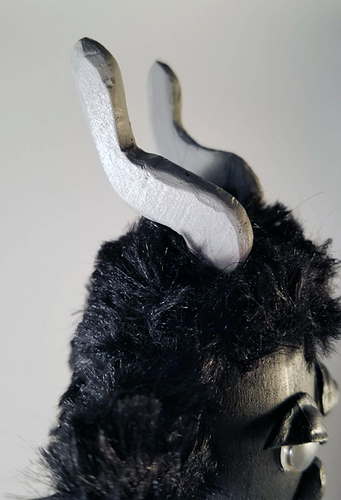 A few-to-several years ago I was keeping track of the materials and tools I used for projects and I decided to try to do that again for awhile. Boy, was this the project that made that a bit of a big deal!

*Other than the nutcracker blank, the DAS was the only thing I bought for this project!

Tara this came together so awesomely!! What a great project, I love him and all his details so much, this totally rocks! Now he just needs a couple bad children to chase, lol, maybe “peanut kids” to crack, ha!

He is amazing! I love all the details. I second the peanut kids idea!

You know how much I enjoyed making him over the last couple weeks! And the silly bits I love just as much as the nice and evil bits! Like how his head fur looks a bit like an 80s jhery curl. And googly eyes! HA!

This is just a fantastic project. So much detail, and such a sense of fun about it. Well done Lady.

Thank you, Jennie! It was certainly a labor of love and humor!

This is fantastic. I love all the details and attention you put in it. love the claws on the monster foot.

How tall is he?

Wow, that is awesome! My brother-in-law would love this.
A shop in town by us does photos with Krampus and we went and got a group picture this year.

@MegAskunk That sounds like such a cool photo op! I would love such a thing!

He is amazing!! I love all the details! The basket! His feet! The chain!

That is so funny and cool! Amazing work!

I love this so much. I would want him displayed year round.

It was fun to see the little in progress items…the basket was so awesome!

A project like this that engrosses you is the best…time disappears and you are in the zone until it is done!

Fabulous job on giving us a peek at your process and what you had to do to get him transformed…ha ha you had vision of this from a reindeer? ha ha…that is terrific!

This is amazing! I would have loved to see progress pictures of this being made. I adore nutcrackers of all sorts. Again amazing!

Lock up the kids! I love the transformation.

The whole thing is amazing, but what really gets me is the way you repurposed the reindeer antlers into horns.

As someone who collects nutcrackers and has a reputation for announcing krampusnacht to all and sundry . . . I’m gonna have to make an homage to your crafty devil!

Awwww, thanks everyone! I was so excited to finish and get to share him with Lettuce Craft!

@artsycandice TheMisterT asked if he would be out all year, but I want to keep him special. Also, I don’t want to dust him!

@AIMR I agree! One of my biggest mental challenges with him was the several points where I had to wait hours and hours for certain things to really, truly dry/cure. I knew I wanted to make a Krampus nutcracker and when I was faced with the 4 choices at Michael’s at 50% off ($7.50), I thought the antlered one was my best bet!

@racky Now, if the kids had been locked up in the first place maybe he wouldn’t have them on his list!

@megwell Thanks! I figured if I could get the antlers off, I could figure out a way to cut them. Thankfully, I got a coping saw a couple years ago when working on mouldings in our house!

@Some_Girl Ooooo! I can’t wait to see! I’m pretty sure the original spark of an idea came to me through building a couple different Krampus-y pinboards on Pinterest!

I knew the weaving was for him! But I never let the kids out of the basket

Everything turned out amazing. Ah-may-ZING!