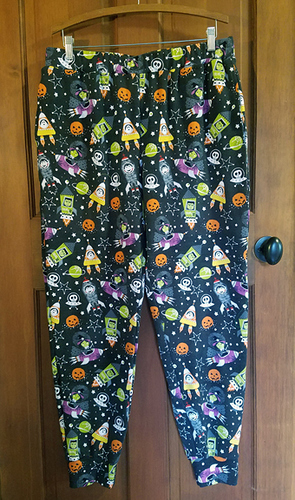 TheMisterT grew up loving the Calvin & Hobbes comic strip and so “lucky rocketship underpants” are thing around here and I have made at least a few pairs of rocketship boxers. The MisterT also proclaims to be a “big fan of comfort” and as such has a few pairs of what he calls comfort pants - i.e. pajama- and sweatpants which I have also made a few. 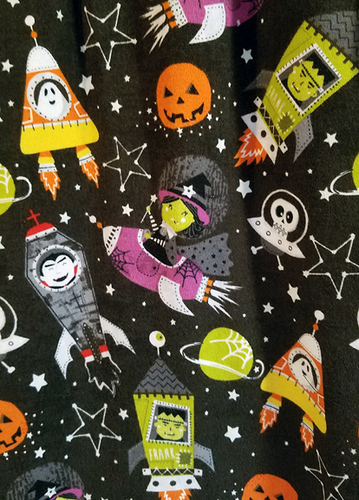 So when I spotted this knit fabric on the 60% off rack at I HAD to get enough to make him a new pair! He also loves Halloween, so these were sure to be a hit.

I’d never made him this style or used a knit so I guess it wasn’t entirely sure to be a hit.

I didn’t realize until I was setting the bolt on the cutting counter that this fabric is also…GLOW IN THE DARK! Bonus! 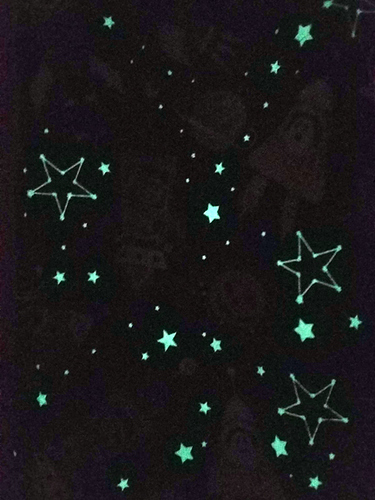 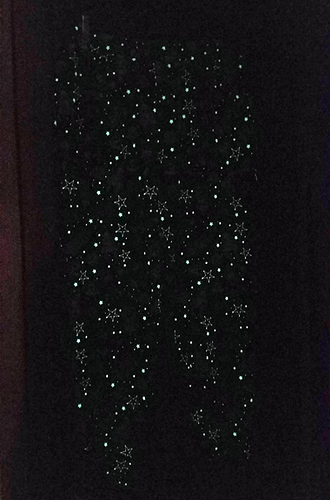 I used Simplicity 8268 which I already had and has sizes for adults, teens and children. It goes together pretty quickly and easily for a pattern for knits. 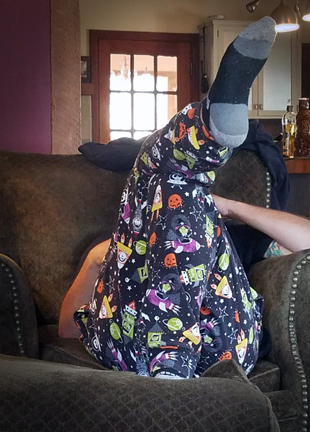 Well those are the most fun sweatpants I’ve ever seen!

THANKS, pals! I added this (in)action shot to the original post.

These are awesome! Especially that they glow in the dark!!

Aww, cute! It looks like they’re already being appreciated.

He wasn’t wearing them initially, because it was pretty warm in the house, but then I wanted to try sitting outside to read and put them on. I said, “Oo, can I get an action shot?” “The action of me sitting?”

He came back in shortly after.

That fabric is fantastic! Halloween monsters in space? I absolutely would have bought some (it wasn’t from JoAnn Fabrics, was it… because I’d go tomorrow to look). And, the fact that it glows in the dark just elevates the awesomeness! I think I’d have to make a dress out of it.

These are too cool for school!

Guess I won’t be staying in my PJs all day today, after all

Thanks for letting me know!

Haha! You bet! I hope you get all that you want!

If you find it, would you share the fiber content? I was so excited about the spaceships that I forgot to look and could not find the material on their website. THANKS!

I like the style of the pants and the way they seem to hold the ankle. As a short person, that is a bonus for me or else I am walking on them all the time. Love the fabric and super bonus on the glow!

Thanks! A couple years ago I got it in my head that I wanted some old-school sweat pants, but as a tall person those that I would find for sale were always holding above-the-ankle, so I was stoked when I found that pattern!

These are all kinds of awesome!

That fabric is super fun! Like @craftADDchick, I too am considering going to Joanns to look for some. Unlike craftADDchick, I’m still not sure if I want to get out of my PJs to head over there…it would make a super cute shirt for my son, but I don’t have a pattern and I’ve never made clothes before.
Your clothes making skills are pretty impressive though! What a fun pair of lounge pants!